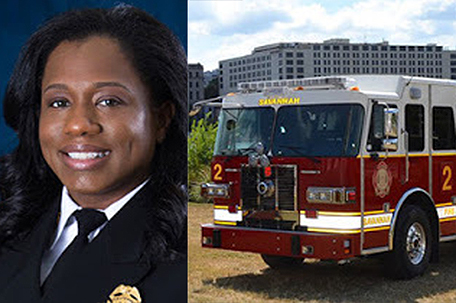 The Savannah Fire Department in Savannah, Georgia has welcomed Whitney Williams-Smith as its newest chief fire marshal. She is the first African American and the first woman to hold the position. As a certified firefighter, she began her career with the Albany Fire Department in 2004.

Her new role as the chief fire marshal will include overseeing all issues pertaining to building occupancy, permitting, fire inspections, fire codes, fire ordinances, fire investigations and fire zones in the city of Savannah.

In 2005, Williams-Smith took a position with East Point Fire. She worked as a firefighter, EMT and fire prevention officer under Rosemary R. Cloud, the first Black woman fire chief in the nation, and Deputy Fire Chief Toni Barnes Washington, a native Savannahian who went on to become City of Decatur Fire Chief.

Her husband, Ronald Smith, Jr., is a firefighter and assistant fire marshal in the City of Roswell, Georgia. They have two children and three dogs.