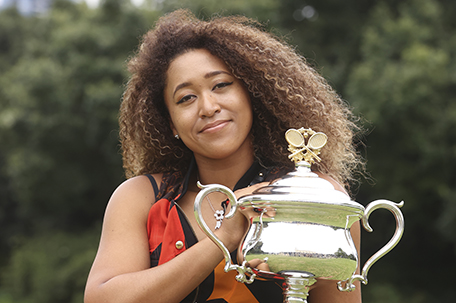 Professional tennis player Naomi Osaka was born to a Japanese mother and a Haitian father who moved to New York when she was three. She is now based in Florida.

She began her professional career at 16. Osaka has been ranked No. 1 by the Women’s Tennis Association and is the first Asian player to hold the top ranking in singles.

In 2020, she became the highest-earning female athlete of all time by annual income.

She’s a strong supporter of the Black Lives Matter movement, was named one of the “2020 Sports Illustrated Sportspersons of the Year” for her activism, and was also included on Time’s annual list of the 100 Most Influential People in the World in both 2019 and 2020.

In above photo, Osaka poses with the Daphne Akhurst Memorial Cup during a photo shoot at Government House the day after defeating United States Jennifer Brady in the women’s singles final at the Australian Open tennis championship in Melbourne, Australia, Sunday, Feb. 21, 2021. (AP Photo/Hamish Blair)