Ready or Not… Here It Comes… 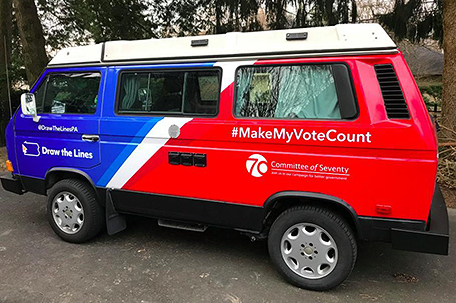 The first Pennsylvania primary with a vote by mail option is happening on Tuesday. And the kinks aren’t entirely worked out.

On the Wednesday before Election Day, Danyl Patterson, a candidate running for the Democratic nomination for the 190th District, was doing a Facebook Live near the Octavius V Catto statue on City Hall’s Southwest corner.

Why? Because near the statue of the City leader who was killed for registering African Americans to vote is the only official ballot box where Philadelphians can bring their mail-in ballot if they didn’t send it early enough for it to be received at the city’s Board of Elections on June 2, the date of the Pennsylvania primary.

That’s not necessarily something that the voting public knows, Patterson said.

“I had someone call me, say that they were going to vote for me, and then say that they were taking that ballot to [State Sen. Vincent] Hughes’s office,” she said. “I also had to explain that your vote has to be received on June 2 in order for your vote to count, and that if you put it in the mail, it’s going to take seven to 10 days because of mail handling delays.”

As Pennsylvania’s largest city prepares to take part in the commonwealth’s first primary election done mostly with mail-in ballots, the city’s election officials, election workers and the candidates themselves are trying to make it work.

“Our main objective is to get through Tuesday’s primary, take the lessons that we’ve learned and apply them to the November’s elections,” said Lisa Deeley, chair of the Philadelphia City Commissioners.

Due to the coronavirus, the Pennsylvania primary had to be moved from its original April date and legislation was passed in March allowing mail-in balloting. About 210,000 Philadelphians applied for the ballots by the May 26 deadline, said David Thornburgh, president and CEO of the Committee of Seventy.

For many of the city’s so-called “supervoters” — seniors who never miss an election  — this new form of voting took some getting used to, said Darisha Parker, who is running for State Representative for the 198th District.

“We really had to educate people about the process,” she said. “We were really pushing people to use VotesPA to get their ballot applications.”

Even with that education, some voters still hadn’t gotten their applied for ballots by press time, said Judith Robinson, a committeeperson in North Philadelphia’s 32nd Ward. Not everyone is comfortable with a computer.

And many of those same people aren’t comfortable venturing outside in a pandemic.

“We’re all making follow-up calls to make sure that everyone who wanted one got their mail-in ballot,” she said. “We have seniors who are scared, and don’t want to leave the house, so they don’t know what to do. We’re also making sure that we have envelopes and stamps.”

For those who get those applications late, putting them in the mail won’t necessarily guarantee that they’ll get to the Board of Elections on time. Philadelphia’s residents will be able to drop their mail-in ballots in the box near the Catto statue anytime between now and 8pm on June 2 to make sure their vote courts.

Also, the City Commissioners and the Committee of Seventy will send out the Votes Wagon on Saturday, Sunday and Monday, a 1991 VW Westfalia Wagon owned by Thornburgh, that will travel throughout the city and collect mail-in ballots for those who may not have been able to get them in the mail on time.

But not all voters are taking advantage of the vote by mail option, so 190 polling places will be set up around the city, Commissioner Deeley said. Putting those places took some doing, she said.

“We divided the city into zones and used all of the public buildings we usually use for polling places first,” Deeley said. “We then shared all of this information with our partners, so that we can hold this election as smoothly and safely as possible.”

As part of that effort to make things safer, personal protective equipment, such as masks and gloves and hand sanitizer will be provided at each polling place for poll workers and voters, she said.

Still, it’s going to be interesting from a social distancing perspective, Robinson said. Her ward is one of the largest in Philadelphia and there will be a total of nine divisions voting in the George Washington Carver Engineering and Sciences High School.

In any case, the Pennsylvania Primary will be held on Tuesday.

For those who wish to access the Votes Wagon, here is the schedule: