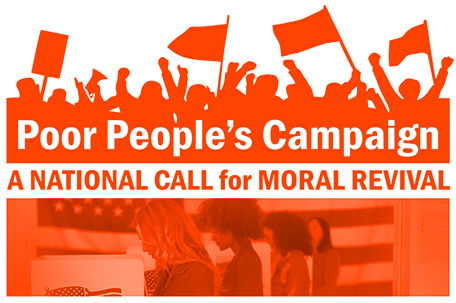 Voter education, participation and empowerment was front and center during the Poor People’s Campaign National Moral Monday Mass Assembly and Teach-In entitled “Voting is Power Unleashed!” which was live streamed from the Pullen Memorial Baptist Church located in Raleigh, North Carolina, on September 14.

It’s more than just knowing what the problems are — it’s the actions we take to solve them, Barber said.

Last month, the Poor People’s Campaign released a report that shows that just a small uptick in the number of poor and low-income voters could change the political calculus of this nation by affecting the outcome of the presidential race in 15 states and U.S. Senate races in 16 states.

We do not speak to these individuals at our own peril, Barber said

There are both physical and metaphorical fires raging through the nation, Rev. Dr. Liz Theoharris said.

“Our democracy is on its deathbed,” she said. “We have to vote, because our lives and the life of our democracy depends on it.”

Former vice president and Democratic presidential candidate Joe Biden spoke with the participants about his proposed policies that address the issues that affect poor and low income communities. His opponent, President Donald Trump, was invited to address the group, however, the campaign never responded.

The nation is in the wilderness due to the COVID-19 pandemic, coupled with the economic crisis and poor people have been left exposed, and the blinders have been ripped off, exposing the systemic racism that has plagued this country, Biden, who appeared virtually, said.

In addition to emphasizing how important it is for people to come together in these trying times, the former vice president also outlined some specific areas that he would focus on such as job training, increased school funding, a focus on preventative healthcare, introducing a $15 minimum wage, fully funded preschool and more. He also committed to protecting “our sacred right to vote.”

The topic of voter suppression tactics from the passage of the 13th Amendment until the present was addressed by members of Forward Justice and Sherrilyn Ifill, president of the NAACP Legal Defense Fund, with an emphasis on the current challenges Americans are facing this election cycle and voting protection initiatives.

A call for poll workers and election monitors was put forth. There was also a call for participants to remember to fill out and submit their census forms.

“This about our future,” Ifill said.

If there was one overriding theme of the whole evening, it was the importance of having a voting plan to combat disenfranchisement at a time where poor and low income people can least afford it.

The disparities laid bare due to the pandemic, and what was already an uneven voting landscape, have been exacerbated by massive unemployment, loss of health care, evictions and more.

From the concerted push back against mail in voting to the shortage of poll workers and polling locations, what is being touted as the most important election of our lifetime is also turning into the most challenging we’ve ever faced as a nation.

For example, there is a significant homeless and houseless population in the United States due to years of economic inequity, chronic underemployment, gentrification and more.

The Poor People’s Campaign is working with the National Union of the Homeless(NUH), who are organizing across several states.

“We are working along with the NUH to identify best practices to make sure homeless and houseless folks are engaged in this election, even as states make changes to their laws to make it more difficult for these eligible voters to participate in our democracy,” Shailly Gupta Barnes, policy director for Unite the Poor and the Kairos Center, one of the anchor organizations supporting the PPC.

During the event, the PPC also announced its 1000:1000 Pledge program, which calls upon 1,000 faith and community leaders to commit to bringing 1,000 people to the polls.

For more information about the PPC election-focused initiatives, visit: www.vote.poorpeoplescampaign.org .