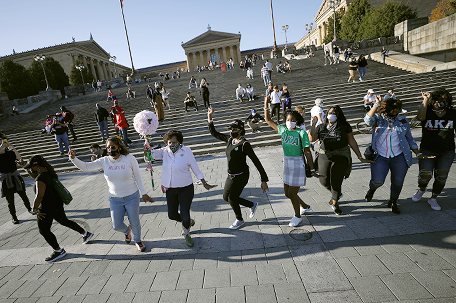 ABOVE PHOTO: Members of various ages and different chapters of Alpha Kappa Alpha, the nation’s first black sorority of which Vice President-elect Kamala Harris is a member, celebrate the election of President-elect Joe Biden and Harris outside the Philadelphia Museum of Art, Sunday, Nov. 8, 2020, in Philadelphia.  (AP Photo/Rebecca Blackwell)

The end of a five-day long Election Day sent Philadelphians dancing into the streets to celebrate the victory of President-elect Joe Biden and Vice President-elect Kamala Harris.

The last time that Philadelphians took to the streets to celebrate a victory the way that they celebrated former Vice President Joe Biden’s defeat of President Donald Trump on Saturday, Nick Foles was still a Philadelphia Eagle and the Philly Special was a trick play.

Last Saturday at around noon, the Associated Press and other news organizations declared Biden the winner of Pennsylvania’s 20 electoral votes. Since he already had 253 electoral votes prior to that, the additional votes put him over the top.

At a drive-in celebration with his supporters at the Chase Center on the Waterfront in Wilmington, Biden renewed his pledge to unite the country.

“I ran as a proud Democrat,” he said. “I will now be an American president. Let this grim era of demonization in America begin to end, here and now. The refusal of Democrats and Republicans to cooperate with one another is not due to some mysterious force beyond our control. It’s a decision. It’s a choice we make. And if we can decide not to cooperate, then we can decide to cooperate. I believe that part of this mandate from the American people. They want us to cooperate.”

The announcement also made history. Biden’s running mate, California Sen. Kamala Harris, became the first woman, the first Black woman and the first person of South Asian descent to be headed to the White House. The Howard University graduate is also the first person from an HBCU to lead the country.

“While I may be the first woman in this office, I will not be the last,” Harris told the audience during the Biden victory celebration last Saturday night. “Because every little girl watching tonight sees that this is a country of possibilities, and to the children of our country, regardless of your gender, our country has sent you a clear message: Dream with ambition, lead with conviction and see yourselves in a way that others may not.”

Harris is also a member of the Alpha Kappa Alpha sorority, which is why the Philadelphia Art Museum steps were awash in pink and green on Sunday. As Harris’s sisters and fellow members of the Divine 9 waited for the “PA Will Be Blue” caravan to Along with other members of the Divine 9, the collective of Black fraternities and sororities, Candace Richmond of Wynnefield organized a dance party at the iconic steps.

About 200 members of the Divine 9 and others came to dance and share the excitement.

That Harris, a member of the nation’s first Black sorority who graduated from where the sorority was founded, was now ascending to the nation’s second highest office was the fulfillment of a long-held mission, Richmond said.

“This was [founder Ethel Hedgeman Lyle’s] vision, to create a sisterhood of Black women to do great things in the world through service, and to help their communities,” Richmond said. “From that small vision of our founders, to the point where we have a Black woman, one of us, from Howard, in the White House…When I heard, I just cried.

This was their dream. And I don’t think that they could imagine that one day we’d have a Black woman in the second highest office in the country. It’s amazing, so we’re proud. We’re really proud.”

But while the dance parties celebrating a new president and vice president were in full swing, some of the people competing for offices in Pennsylvania had no reason to celebrate.