Me and Julio Down By The Schoolyard 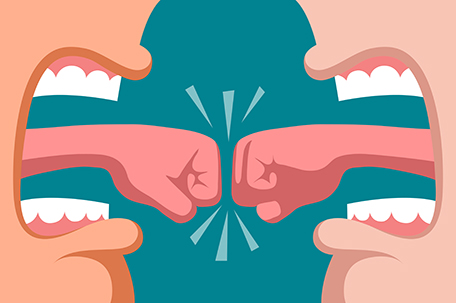 Voters turned on Tuesday night’s presidential debate hoping to get the insight needed to make a decision come November. What they got was a couple of septuagenarians engaged in a playground fight.

To be honest, I’d have been more surprised if Tuesday night’s first Presidential Debate between Republican President Donald Trump and his Democratic opponent, former Vice President Joe Biden, had been a calm, measured, sedate affair.

I’ve been covering both of these guys for a while and one thing I’ve always been able to count on with them is that they’ll be no shortage of quotable lines. They’ve both been known to say some pretty outrageous stuff, or stuff that’s inappropriately funny.

But I wasn’t expecting what I saw on Tuesday. In fact, unlike CNN’s Dana Bash, I can’t call it exactly what it was in a family newspaper.

That’s because we didn’t see anything close to a debate.  What we saw at Case Western Reserve University and Cleveland Clinic on Tuesday was a couple of septuagenarians who should know better acting like 5-year-olds in a playground fighting over a football. While Biden had little choice than to respond to some of Trump’s charges, how this debate was conducted makes me wonder where I go to get the 90 minutes of my life I gave this debate back.

As an example of just how in over his head moderator Chris Wallace was on Tuesday night, here’s Wallace asking Biden about the possibility of packing the courts should he be elected in response to the perception that the Republicans have been packing the courts:

WALLACE: “So my question to you, is you have refused in the past to talk about it. Are you willing to tell the American people tonight whether or not you will support either ending the filibuster, or packing the court…”

BIDEN: “Whatever the position I take on that, that will become the issue. The issue is the American people should speak. You should go out and vote. You’re in voting now. Vote and let your senators know how strongly you feel. Vote now. Make sure you in fact let people know.”

TRUMP: “He doesn’t want to answer the question.”

BIDEN: “I’m not going to answer that question because…”

TRUMP: “Why wouldn’t you answer that question?”

BIDEN: “The question is…”

(Talking over each other)

BIDEN: “This is so unpresidential.”

See what I mean?

While questions on such things as the Affordable Care Act, the coronavirus pandemic, the economy and election integrity were also asked, hearing the answers took more effort than it should have, especially when Biden was on the receiving end of the question.

In fact, I have to commend Joe Biden for his patience. My significant other always says that when you’re losing a debate, how people can tell that is when you go personal. The whole section in which Trump and Biden are discussing Biden’s children, especially since Trump has decided to use Hunter Biden, who has had issues with substance abuse, as a campaign issue, was more than a little uncomfortable.

(Personally, I would have asked Trump if his son Eric has had his visit with New York Attorney General Leticia James yet, but I’m petty.)

Finally, let’s talk about the only thing that the television pundits seem to have gotten from this debate — Donald Trump’s unwillingness to disavow White supremacist groups like the Proud Boys.

Honestly, I don’t know why anyone is surprised that Trump didn’t speak out against White supremacists. The first political endorsement the man got when he descended from Trump Tower to announce his run for president came from David Duke, the former grand dragon of the United Klans of America. The Proud Boys are a part of his unapologetically racist base.

But while the man who said that there were “good people on both sides” when a White supremacist killed an anti-hate protestor with his car in Charlottesville, and giving a shout out to his base is just par for the racist course, who he’s aiming this particular Guided Missle of Racism toward demands that we pay attention.

“I’m urging my supporters to go into the polls and watch very carefully. Because that’s what has to happen. I am urging them to do it,” Trump said. “As you know, today, there was a big problem. In Philadelphia, they went in to watch. They were called poll watchers — a very safe, very nice thing. They were thrown out. They weren’t allowed to watch. You know why? Because bad things happen in Philadelphia, bad things. And I — I am urging — I am urging my people. I hope it’s going to be a fair election. If it’s a fair election…”

On Tuesday, satellite election offices opened in Philadelphia. These offices allow voters to register to vote, request, fill out and drop off mail-in ballots, and have all of their questions answered about voting.

A Trump supporter came to the Overbrook Elementary School office to, as she put it, “oversee” the election. Granted, state law says that poll watchers aren’t allowed in polling places before Nov 3, and if you are a poll watcher, you have to be certified by the Commonwealth and registered to vote in the place you want to oversee, but what do we know?

Unfortunately, the message didn’t make it to the president, or his family, because Eric Trump joined his father in saying that Philadelphia needs to be watched. In fact, Trump ended the debate by saying “Bad things happen in Philadelphia!”

When you pair that with his entreaty to the Proud Boys that they “stand back and stand by” — something they’ve put on t-shirts, by the way — you get a recipe for folks coming to Philadelphia, messing with voters and, well, catching a beatdown. But it should also let everyone here in Philadelphia come to a realization that we all should have come to a while ago.

Your vote is important, and it counts. That’s why folks are so determined to keep you from exercising it. The last day to register to vote in November is Oct. 19.

As for the next debate, that’s on Wednesday when Vice President Mike Pence and Sen. Kamala Harris take to the stage at the University of Utah in Salt Lake City.

Hopefully, the schoolyards will be safe this time.