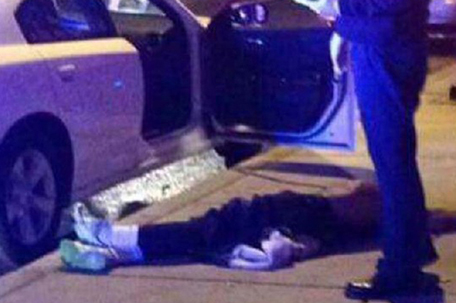 There are only three facts that the mother of Brandon Tate-Brown and the Philadelphia Police Department agree on in the December 2014 police shooting of her son, 26-year-old Brandon.

Where he was killed: 6700 Block of Frankford Avenue Officer who fired fatal bullet: Nicholas Carrelli Where fatal bullet struck Mr. Tate-Brown: Behind his left ear, near the base of his skull

Almost everything else about this controversial police shooting during the pre-dawn hours of Dec. 15, 2014 is being challenged by Tanya Brown-Dickerson, mother of the victim, and her lawyer, well known civil rights advocate Brian Mildenberg.

“Six months ago, they (the police) were arguing Mr. Brown was killed while reaching for a gun. Now we know that’s not true,” Mildenberg said in an extensive interview last week. “The case should be reopened. Because they lied about what really happened is what prompted my firm to take the case.” The false claim about a gun in Brown’s car that he allegedly was reaching for when the fatal bullet was fired is the primary focus of Mildenberg’s wrongful death lawsuit filed against the city and the two police officers in the incident.

Buttressing his evidence against the police department’s original explanation is a video recording of Brown apparently trying to elude police by running behind his rental car when a bullet fired by Officer Carelli hit him behind his right ear at around 2:50 AM. Brown immediately droped face down onto Frankford Avenue. Retail store security cameras in the area–one at a nearby TD Bank, one from a local gun store, and one from a local nail salon–took video of the shooting as well.

“The story about Mr. Brown reaching for a gun in his car was repeated by the police for months because they wanted to avoid another Ferguson here in Philadelphia,” explained Mildenberg, drawing attention to the public demonstrations and rioting which occurred in that Missouri town following the police killing of Michael Brown. “But once the video images were collected and inspected by internal affairs investigators, they couldn’t justify their story. The gun evidence just doesn’t add up. We doubt the police officers’ credibility,” added Mildenberg.

That’s why Mildenberg has asked District Attorney R. Seth Williams to change his mind and reopen the criminal investigation. So far, Williams has declined to do so, prompting him to hold press conferences outside of City Hall and to formally ask the U.S. Justice Department to intervene.

Meanwhile, Mildenberg and Brown-Dickerson have also been reaching out to various media outlets to update them on developments in the case.

“The truth is still coming out about what happened to my son that night,” said a frustrated, but resolute Brown-Dickerson. “When we couldn’t get any real answers from the city or the police, I had no choice but to sue. I waited six months for the truth to finally come out. I know my son. I know he is not the kind of person who would reach for a gun to hurt a police officer.”

When asked if she were prepared for the long wait usually associated with these kinds of lawsuits, Tate-Brown’s mother added, “However long it takes; that’s how long I’ll wait. But, finally I’m no longer alone, people are starting to hear the truth.” 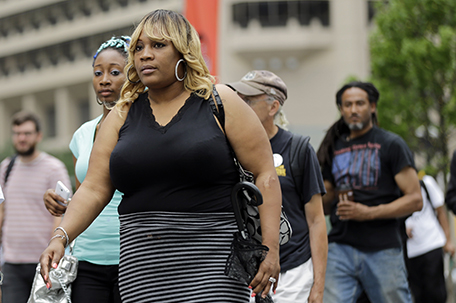 Tanya Brown-Dickerson, the mother of Brandon Tate-Brown who was shot by Philadelphia police as he ran during a traffic stop, arrives for a news conference Monday, June 15, 2015, outside of City Hall in Philadelphia. Brown-Dickerson is suing the city over the fatal shooting of her son last December. (AP Photo/Matt Rourke)

According to the mother’s lawsuit, the entire incident began early Dec. 15, 2014 when police “improperly” pulled over Brown’s new white Dodge Charger with Florida license over in the 6000 block of Frankford Avenue allegedly for failure to have his headlights on. Tate-Brown complied with the pursuing police vehicle, stopping his rental car in 6700 block of Frankford Avenue, in front of several shops and directly adjacent to a gun dealership.

A video shows that before Tate-Brown was asked to step out of his vehicle, one of the police officers, appeared to have his gun pointed at Tate-Brown the entire time he was still in the vehicle. A show of potential lethal force like this “is not in accordance with standard police procedure, or in accordance with the statement they were just checking on the safety of a motorist,” the suit alleges.

During his interaction with the police, the lawsuit alleges that Tate-Brown explained to the police that he was legally operating the Dodge Charger, which he had obtained from the rental car agency where he worked. He produced the appropriate paper work at the request of the officers, according to the lawsuit.

Inexplicably though, the police “began an aggressive interaction with Tate-Brown with the intent of harassing him, instigating a struggle, assaulting him and (finally) charging him with a crime,” the suit says.

Mildenberg goes on to argues that since Tate-Brown lawfully demonstrated he was approved to drive this rental car, police had no legal reason for the traffic stop and certainly “no probable cause” to request him to step out of his vehicle.

Once Tate-Brown exited the vehicle, one of the officers “claims he spotted a gun lodged between the center console and the passenger seat” and claims to have called out “Gun!” to his partner, the suit alleges.

An eyewitness says he then saw Brandon standing outside of his car with one of the officers pointing a gun at his back.

Within a short period of time, Tate-Brown “resisted Officer 2” when he “began to physically, beat, hit or harm” him, the suit alleges. This prompted “Officer 1 to go around the vehicle and help his fellow officer fight” the suspect, declares the suit. At no time, however, did either officer make any attempt to “obtain the alleged gun from the car, secure the gun, or take any action to document the existence of the alleged gun,” the suit declares. When set upon by the two policemen, Tate-Brown, according to the lawsuit, attempts to break free from their control and runs toward the back of his parked vehicle. At no time does he attempt to enter or reach inside of his car. In his hand is a cell phone he has been holding since the beginning of the confrontation.

The lawsuit alleges that there is a video showing Tate-Brown running across Frankford Avenue toward the rear of his Charger, from left to right. Officer Nicholas Carrelli at this point fires a single shot from his service revolver “hitting Tate-Brown in the back of his head, killing him,” the suit alleges. Attorney Mildenberg further challenges the police account of the shooting in his lawsuit when he raises questions about the “DNA evidence” that was found on the gun, a .22 caliber semi-automatic Taurus pistol. Mildenberg points out that months after the shooting the police claims about finding Tate-Brown’s DNA on the butt of the gun should be seriously questioned since his blood or other bodily fluids could have been spilled onto the hood the car when police were seen to have placed the gun during their initial investigation the night of the killing. The victim’s fingerprints were never found on the weapon.

The final pages of the suit against the city sum up their explosive charges in blunt language that so far, police commanders have refused to answer: “The official police department position, as released to the public, is that Officer Carrelli was justified in shooting Tate-Brown because, at the time, he was reaching for the alleged gun in the front passenger seat of the vehicle. However, the surveillance video shows that Tate-Brown was shot near the rear of the vehicle, by the right brake light, not near the passenger door or reaching into the passenger door.”

“The claim that Tate-Brown was reaching into the vehicle for a gun at the time he was shot is a complete fabrication on the part of the police officers and the police department.”