Just A Couple of Guys Sitting Around Talking… 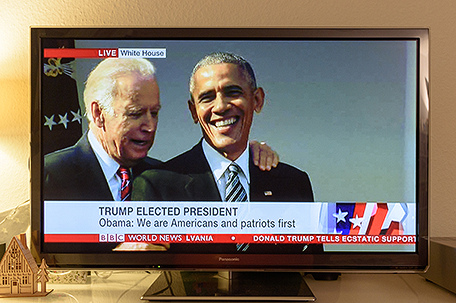 While it looked like a pair of old friends catching up, the socially distanced conversation between former President Barack Obama and Vice President Joe Biden was, for all intents and purposes, a campaign ad.

In 2018, former President Barack Obama was a guest on David Letterman’s Netflix show “My Guest Needs No Introduction.”

The show featured the two men talking about a combination of things like how Obama’s first day out of office and why it took him 30 minutes to assemble a reading lamp for his daughter Malia when she went off to college to the impact that the late Congressman John Lewis had on Obama’s life.

It garnered millions of views and was a good launching pad for Letterman’s show, which has become a hit for Netflix.

One of those viewers was probably someone on former Vice President Joe Biden’s Presidential campaign team because they took that format and used it for “A Socially Distanced Conversation: President Barack Obama and Vice President Joe Biden”. The conversation, which is now available on YouTube and has more than 800,000 views, features the two men talking about some of the same topics Obama took on with Letterman.

But this “conversation” is a campaign ad. Make no bones about it.

The 15-minute dialogue between the former President and the former VP talked about their time in office, and also brought it to the current day. For example, Obama asked Biden about his economic plan and its focus on getting and keeping people on their feet after the coronavirus pandemic has run its course.

One, provide a big enough stimulus to keep businesses afloat, Biden said. Then, you have to help businesses be able to survive by including the added overhead costs of a new normal that includes masks and social distancing.

(Now if that phrase sounds familiar to you, that just happens to be the title of Biden’s proposed economic plan.)

But that wasn’t the only way that this reminded you that you were looking at a campaign ad. By putting the man occupying the most space in President Donald Trump’s head — the one that he’s been unfavorably compared to the most over the last four years — and the man who is likely to be his opponent in the same video, it was a chance for the Democrats to use an unfiltered medium to share their feelings on the President’s weaknesses.

One thing I’m starting to notice is that most of the folks in Joe Biden’s orbit, at least the ones closest to him, don’t say Donald Trump’s name if they can help it. They kind of treat him like Lord Voldermort from the Harry Potter books. This chat between former co-workers was no exception.

When talking about President Trump’s attempts to abolish the Affordable Care Act in the middle of a pandemic, Biden refers to the president as “this guy”.

As a meeting between two friends that talks about everything from empathy to policy, it works.

But as a campaign ad, the jury is out. By having the men practice social distancing and come in wearing masks, it shows voters that the Democrats understand that the coronavirus is still with us and that we need to have political conversations that acknowledge that.

I’m just curious to see how the Republicans are going to respond.