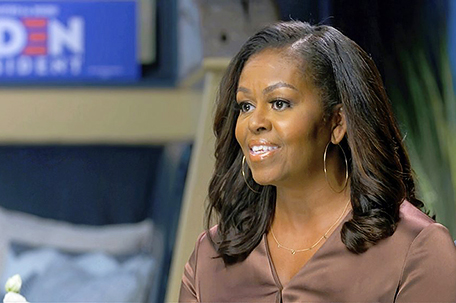 By Denise Clay
The 2020 Democratic National Convention took a little getting used to at first.

There were no pictures of cheering crowds piling into a convention hall waiting to hear from their favorite politicians.

There were no hokey hats, funny eyeglasses or signs that you could take home afterward to put in your window at home. There were no pull away shots showcasing such things as beer, bratwurst or anything connected to Milwaukee, Wisconsin, where the DNC was supposed to be, designed to make you think that you were in a “Happy Days” or “Laverne and Shirley” episode.

There were no commercials.

But on the first night of a DNC that had no cheering crowds or any of the usual pomp and circumstance due to the coronavirus pandemic, a gathering of American citizens spent two uninterrupted hours making the argument that it’s time to replace the man that brought us here: President Donald Trump.

The last two speakers of the night — Sen. Bernie Sanders and former First Lady Michelle Obama — used their time to tell the America that the country under its current leadership won’t survive another four years of Donald Trump.

After thanking his supporters for standing by his side during his run for the 2020 Democratic nomination, Sanders spoke directly to them, telling them that voting for Biden is crucial to moving toward the America they want.
“Our campaign ended several months ago, but our movement continues and is getting stronger every day,” Sanders said. “Many of the ideas we fought for, that just a few years ago were considered “radical,” are now mainstream. But, let us be clear, if Donald Trump is re-elected, all the progress we have made will be in jeopardy.”

And so is democracy, Sanders said.

Because of some of the moves Trump has made, most notably those impacting the United States Postal Service and the country’s response to the coronavirus, the country is moving closer to a place where it benefits no one. Voting for Joe Biden will keep this from happening, he said.
“During this president’s term, the unthinkable has become normal,” Sanders said. “He has tried to prevent people from voting, undermined the U.S. Postal Service, deployed the military and federal agents against peaceful protesters, threatened to delay the election and suggested that he will not leave office if he loses. This is not normal, and we must never treat it like it is.”

“Under this administration authoritarianism has taken root in our country,” Sanders continued. “I, and my family, and many of yours, know the insidious way authoritarianism destroys democracy, decency, and humanity. As long as I am here, I will work with progressives, with moderates, and, yes, with conservatives to preserve this nation from a threat that so many of our heroes fought and died to defeat.”

Reiterating her belief that becoming president doesn’t create your character, it reveals it, she ran down the myriad of character revealing actions that Trump has taken, ranging from racist comments to ignoring scientists sounding the alarm about a pandemic.

Having seen the Presidency up close with her husband, former President Barack Obama, Michelle Obama said that it’s not a job for beginners or people who lack empathy. Unfortunately, we put someone with both of those deficits in office four years ago, she said.

And using one of Trump’s own lines, Obama said that it’s time that we admitted it to ourselves.

“Let me be as honest and clear as I possibly can. Donald Trump is the wrong president for our country,” she said. “He has had more than enough time to prove that he can do the job, but he is clearly in over his head. He cannot meet this moment. He simply cannot be who we need him to be for us. It is what it is.”

“So if you take one thing from my words tonight,” Obama continued, “it is this: if you think things cannot possibly get worse, trust me, they can; and they will if we don’t make a change in this election. If we have any hope of ending this chaos, we have got to vote for Joe Biden like our lives depend on it.”

With at theme of “We The People,” actress Eva Longoria emceed an evening filled with a combination of videos and live speeches from Americans impacted by things such as the coronavirus, racial injustice and other things that have been a part of the turmoil that has been the American landscape in 2020.

The convention allowed families who have been most impacted by those things to take the spotlight. Philonise Floyd, the brother of George Floyd, and his family led the nation in a moment of silence in the names of those who have been lost to police brutality.

But one of the most powerful moments of the first night came when Kristin Urquiza of Arizona talked about the loss of her father, Mark Anthony Urquiza. Because her father trusted Trump’s assessment of the coronavirus as something that shouldn’t be taken all that seriously, he went to a karaoke bar with friends as soon as Arizona’s stay at home order was lifted.

Mark Anthony contracted the coronavirus, spent five days on a ventilator, and died in a hospital room alone with a nurse holding his hand, Kristin said.

While Trump didn’t create the virus or give it to her father, Urquiza laid his death at the President’s feet.

“My dad was a healthy 65-year-old,” she said. “His only preexisting condition was trusting Donald Trump, and for that, he paid with his life. One of the last things that my father said to me was that he felt betrayed by the likes of Donald Trump. And so, when I cast my vote for Joe Biden, I will do it for my dad.”

Pennsylvania, one of the swing states that Trump won in 2016, had its moment in the sun throughout the evening. From Steve, a businessman from Swarthmore whose business has been impacted by the

The program also featured more than a few Republicans expressing some buyer’s remorse with the choice that they made in 2016. From former New Jersey Gov. Christine Todd Whitman to former Ohio Gov. John Kasich, the group let the country know that while Trump might share a party with them, he’s lost their confidence.

“I’m a lifelong Republican,” Kasich said in a pre-recorded video.“But that attachment holds second place to my responsibility to my country. In normal times, something like this would probably never happen. But these are not normal times.”

Just A Couple of Guys Sitting Around Talking…