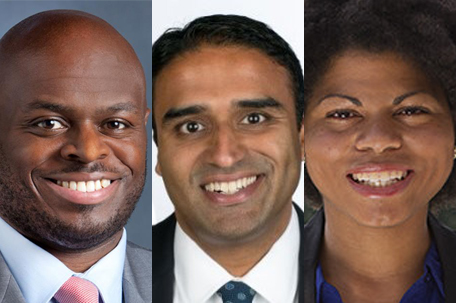 Tony Allen, Ph.D., is the president of Delaware State University (DSU), one of the nation’s premiere public Historically Black Colleges and Universities. Before being appointed president, Dr. Allen served as executive vice president and provost at DSU and previously led Bank of America’s corporate reputation group. He is also the founding president of the Metropolitan Wilmington Urban League and co-founder of Public Allies Delaware. In the 90’s, Allen worked in then-Senator Biden’s office as a special assistant and speechwriter.

Maju Varghese was chief operating officer and senior advisor on the Biden-Harris campaign from the primaries through the general, overseeing the campaign’s day-to-day operations and leading the entire campaign through an unprecedented shift to remote working.

He previously served in the Obama White House in various roles, including assistant to the president for management and administration and deputy director of advance. He has also worked as the chief operating officer at The Hub Project and as a senior advisor at the law firm Dentons.

Erin Wilson served as the Biden-Harris campaign’s national political director throughout the primary and general elections, the senior staff member responsible for relationships with hundreds of elected officials and leaders across the country.

Previously, Wilson was a senior aide in Pennsylvania Senator Bob Casey’s office, most recently serving as his state director and senior advisor to his 2018 reelection.

She is also a Hillary for America and Democratic National Committee alumna.