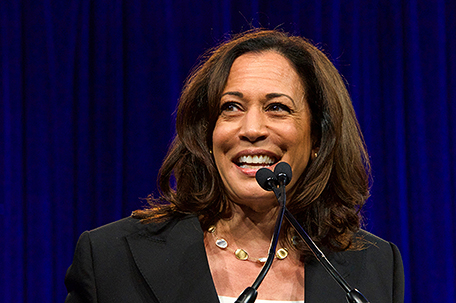 During her debate with Vice President Mike Pence, Sen. Kamala Harris often found herself having to reclaim her time.

In order for Wednesday’s contest between the two hopefuls to be a more substantive debate than last week’s debate between their running mates, President Donald Trump and former Vice President Joe Biden, all Pence and Harris had to do was get out some coherent sentences about actual policies without being interrupted.

But while the debate held at the University of Utah in Salt Lake City, unlike last week’s event, had more decorum than a WWE wrestling match, it wasn’t without moments that made you not only question the logic of continuing to have debates. Minutes into the debate, I noticed two things:

*The Commission in Presidential Debates really needs to reconsider how it enforces its rules. For the second time in as many weeks, talking over the moderator and your opponent was the order of the day. Unlike Fox News Sunday’s Chris Wallace, who at least attempted to fact-check, USAToday’s Susan Page not only got run over by Pence, she let him prevaricate at will. Which leads me to this point…

If you’re in a poker game, and the person sitting across the table from you is the nation’s current vice president, get up, grab your chips and walk away. Because he has the rare ability to lie to your face without a change in expression or blood pressure, you’ll have to explain to your family why you have to move out of your house if you play with him. He’ll clean you out and try to convince you that he didn’t.

But now that we’ve gotten that out of the way, let’s talk about the debate itself. And don’t worry, I won’t focus on the fly on Mike Pence’s head.

Like Wallace did last week, Page tried to structure the debate into sections. The one that I probably paid the most attention to was on the coronavirus, which made a lot of sense, because Pence is the chair of the coronavirus task force and is directly responsible for the nation’s response to the virus.

“The American people have witnessed what is the greatest failure of any presidential administration in the history of our country,” she said. “We’re looking at frontline workers who have been treated like sacrificial workers. And here’s the thing. The vice president and the president were informed about the nature of this pandemic. They knew and they covered it up.”

And Pence? Well, he came out lying.

“I want the American people to know that from the very first day, President Donald Trump has put the health of Americans first,” he said. “Before there were more than five cases in the United States, all people who had returned from China, President Trump did what no other American president had ever done. And that was suspend all travel from China, the second largest economy in the world. Biden opposed that decision. He said it xenophobic and hysterical, but I can tell you, having led the White House Coronavirus Task Force, that that decision alone by President Trump bought us invaluable time to stand up the greatest national mobilization since World War II. And I believe it’s saved thousands of American lives.”

Yep. He said it with a straight face. Like I said, don’t sit at a poker table with this guy.

In all honesty, if you came to this debate looking for information as an undecided voter, you probably didn’t get much. While neither candidate answered every question asked — and a lot of folks have chosen to focus on Harris not answering Pence’s question regarding adding new seats to the Supreme Court in a Biden-Harris administration — Pence tended to use the Chewbacca Defense from “South Park” when it came to answering what he was asked.

(For those of you who don’t know what the Chewbacca Defense is, it’s answering a question by totally deflecting to something else. Like, for example, when Page asked Pence how he would advise the state of Indiana should Roe v Wade be struck down by the Supreme Court, he decided to talk about terrorism in the Middle East. That’s the Chewbacca Defense.)

But this is all a function of the fact that the Commission on Presidential Debates has allowed itself to be run over during these debates. I’ve produced a couple of debates, and one thing that we didn’t allow was for the participants to change the rules as they go or not follow the time limits we had set.

Page was the latest to do this. And while I can understand that it was tough to reign things in, she should have tried a lot earlier than toward the end of the debate. But then again, that’s when Wallace decided to try and exert himself, so there’s precedent.

Another thing that stood out to me, and it was related to the problems that Page was having in controlling the debate, is what Wednesday night showed about the process of picking a running mate when running for president.

People have given Mike Pence the benefit of the doubt when it comes to his connection to Donald Trump. He was the “good cop” to Trump’s “bad cop.” He was the traditional Republican that many thought would keep Trump’s baser impulses in check.

He’s not. And that’s why among the memes going out on social media today is a list of the faces that Kamala Harris made throughout the debate. Pence had no respect for either of the women he was sharing the stage with. To be honest, I’m surprised that he didn’t aim Trump’s “nasty woman” trope at Harris for standing up for herself.

Now there’s supposed to be a second debate between President Trump and former Vice President Biden next week, but that’s up in the air right now. The Commission on Presidential Debates wants it to be virtual, and Biden has agreed, but Trump says he won’t do it unless it’s in person.

My guess is that the Commission will cave in to that demand.

Me and Julio Down By The Schoolyard