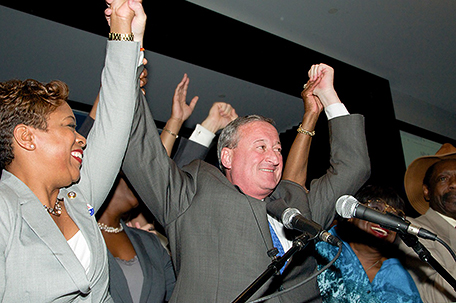 In the aftermath, all the predictions of an electoral thrashing came to pass. The polls taken by a hostile white press were on point. And the street gossip about the failure of  State Sen. Anthony Hardy Williams’s campaign to ignite any real neighborhood “soul power” proved equally correct.

The mayoral campaign of Sen. Williams, touted as the frontrunner just five months ago, crashed and burned last week against an organized labor-led juggernaut spearheaded by former city councilman Jim Kenney, 56, son of a fireman and lifelong Mummer. The smashing victory for the South Philly native who began his political life as a brusque sounding grandson of Irish immigrants was built on pluralities in wards in nearly every section of the city crossing economic, ethnic and racial boundaries that most experts would have believed could be achieved just several months ago.

How did it happen? As in any campaign there are lots of reasons. But this eventual outcome was obvious early on. The Williams campaign, financed by outlanders and staffed by neophytes, always lacked the intellectual capital needed to compete against a well-financed and experienced opponent. The blowback from his ill-considered dismissal of Police Commissioner Charles Ramsey near the end of the campaign is illustrative of just how much judgment and discretion was missing.

Prior to Kenney’s last minute insertion into the race for mayor, Williams appeared to have a lock on the all- important African American vote against a line up of five opponents, none of whom had a credible citywide network or solid financial backing. The city’s history of racial voting in previous elections suggested Williams had a an enviable edge starting out. At the start of the campaign season organized labor was really checkmated because they had no first-tier candidate and their preferred candidate, Council President Darrell Clarke, kept playing  a game of hide-and-seek as to whether he would actually enter the contest. And when he eventually decided to opt out, he stymied not only City Controller Allen Butkovitz, but organized labor as well. The city unions and building trades folk under the banner of the AFL-CIO were united for the first time in a long time. All they needed was a standard bearer.

The surprise exit of former city solicitor Ken Trujillo, who was hardly known even among Latino voters, paved a smooth entrance for Kenney, who inherited the staff and fundraising groundwork that had already been put in place. More importantly, it gave organized labor a rallying point where they could put their money together to counteract the fundraising prowess Williams had from his suburban based hedge fund managers who probably spent upwards of $6 million most of it going to television commercials. Suddenly, the perceived frontrunner—Williams–was in a dog fight; except that his pit bull needed dental work.

As labor union endorsements for Kenney began to pile up during March and April, the Williams campaign had a hard time with an unfriendly daily press corps that didn’t track his growing list of supporters with equal fanfare. When the largest African American union—Laborer’s Local 332– endorsed him, neither the Philadelphia Inquirer or Daily News covered it as a daily story. Adding to Williams’s pain, his endorsement by the Black Clergy of Philadelphia was rife with quotes from pastors that had preferred Kenney.

Thus, when the “Northwest Five” group of African American elected officials (two councilwomen and three state representatives) held a surprise news conference to support Kenney, the Williams effort appeared anemic and desperate, especially within his own ethnic base.

During the next eight weeks and after more than 60 public forums, the Kenney lead continued to expand over Williams while most voters moved away from any serious consideration of the other four candidates. And having failed to strengthen ties with black political operatives in sections of the city other than his own West Philadelphia base, Williams’s final efforts continued to appear as though he had been deserted by all except his pro-school choice money men.

For example, take the vote by the black Ward Leaders to endorse his candidacy, six weeks before the May 19th election. According to several sources, the group of nearly 30 men and women hemmed and hawed for several hours before finally deciding to support Williams by a narrow margin. In contrast, they voted unanimously for Anthony Clark, the City Commissioner who hadn’t even bothered to vote for the past four years. But it’s the vote total for both men that reflects just how poorly Williams’s campaign registered with Philadelphians. According to the vote totals tallied by the three-judge panel overseeing this election, Clark, whose failure to show for work is well documented, gathered 14,000 more votes than Williams.