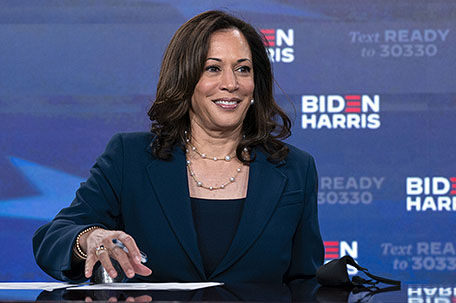 On the third night of the Democratic National Convention, history makers joined Sen. Kamala Harris as she became the latest to join the group.

On Wednesday night, Sen. Kamala Harris formally accepted the Democratic Party’s nomination for Vice President, becoming the first woman of color to play that role on a major party ticket.

Dressed in a plum colored suit with a string of pearls around her neck, Harris gave a speech that laid out a better vision for an America currently battling the twin pandemics of the coronavirus and racial inequality. She also paid tribute to her late mother, Shymala, the Black women who made her rise in politics possible like Shirley Chisholm, and her HBCU and AKA sorority family.

In her speech, Harris, the daughter of Jamaican and Indian immigrants, talked about the issues that have been exacerbated by how President Donald Trump has handled the challenges America is facing. Having grown up with her mother’s vision of the Rev. Dr. Martin Luther King’s Beloved Community, it’s been hard to take, she said.

“And while this virus touches us all, let’s be honest, it is not an equal opportunity offender,” Harris continued. “Black, Latino and Indigenous people are suffering and dying disproportionately. This is not a coincidence. It is the effect of structural racism. And let’s be clear. There’s no vaccine for racism. We’ve gotta do the work. We’ve gotta do the work to fulfill that promise of equal justice under law. Because, none of us are free…until all of us are free…”

Part of doing the work is sending people who truly want to lead to Washington to do the work. People like she and Democratic Presidential Nominee Joe Biden.

The necessity of electing Biden to save the country was a common thread throughout the convention, which on Wednesday was emceed by actress Kerry Washington. Video presentations showcasing Biden’s work on domestic violence, gun violence, climate change and other issues that hadn’t come up much at the beginning of the convention.

But while this was Harris’s night to make history, she wasn’t the only historical figure on the DNC’s virtual stage. Nancy Pelosi, the first female Speaker of the House was there. As was Hillary Clinton, the first woman to head a major party’s presidential ticket and Barack Obama, the nation’s first Black president.

During their speeches, Obama and Clinton, two of President Trump’s favorite targets, talked about their willingness to give Trump the benefit of the doubt initially.

But how he’s conducted himself over the last four years made both of them sound the alarm.

While he wasn’t expecting Trump to continue the policies he had put in place before leaving the White House in 2016, Obama was shocked to see just how far off course Trump was allowing the country to veer.

To Trump, Obama said, the Presidency is another episode of “The Apprentice”. And he didn’t mean that as a compliment.

“I never expected that my successor would embrace my vision or continue my policies,” Obama said. “I did hope, for the sake of the country, that Donald Trump might show some interest in taking the job seriously; that he might come to feel the weight of the office and discover some reverence for the democracy that had been placed in his care. But he never did.”

“For close to four years now,” Obama continued, “he’s shown no interest in putting in the work; no interest in finding common ground; no interest in using the awesome power of his office to help anyone but himself and his friends; no interest in treating the presidency as anything but one more reality show that he can use to get the attention he craves.”

Clinton, who lost the 2016 race to Trump despite besting him by more than 3 million votes in the popular vote, took it a step further.

“Remember in 2016 when Trump asked: “What do you have to lose?” Clinton asked. “Well, now we know: our health, our jobs, even our lives. Our leadership in the world and, yes, our post office. As Michelle Obama and Bernie Sanders warned us on Monday: If Trump is re-elected, it will get even worse.”

“For four years, people have said to me, “I didn’t realize how dangerous he was.” “I wish I could go back and do it over.” “I should have voted,” she continued. ”This can’t be another woulda-coulda-shoulda election. If you’re voting by mail, request your ballot now, and send it back as soon as you can. If you vote in person, do it early. Bring a friend and wear a mask. Become a poll worker. Most of all, no matter what, vote. And convince everyone you know to vote.”