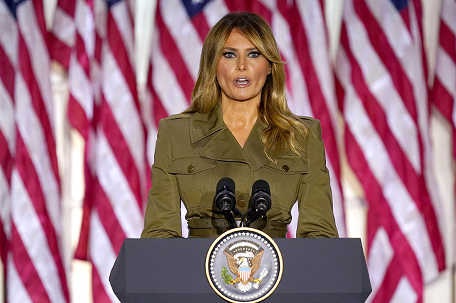 ABOVE PHOTO: First lady Melania Trump speaks on the second day of the Republican National Convention from the Rose Garden of the White House, Tuesday, Aug. 25, 2020, in Washington.  (AP Photo/Evan Vucci)

The business of the Republican National Convention was over by Monday afternoon. But the speech making went on and on and on.

Because of his fondness for ratings, you couldn’t blame President Donald Trump if he felt like a combination of the country he’s led for nearly four years and Mother Nature herself were conspiring against him.

On Wednesday night, a time when the entire spotlight would normally be centered on Trump’s Republican National Convention, and the re-nomination of he and Vice President Mike Pence, they instead had to share it with Hurricane Laura, which made landfall that night, and the decision by professional athletes ranging from NBA superstar LeBron James to former U.S. Open champion Naomi Osaka not to play their games in protest of the shooting of Jacob Blake in Kenosha, Wisconsin.

But while the Vice President’s speech, which was held at the Fort McHenry national park in Baltimore, was overshadowed by events outside it, Pence used his time to further the GOP’s message that a vote for Democratic Presidential candidate Joe Biden and his running mate, Sen. Kamala Harris, will lead America down a hellscape reminiscent of the movie “Mad Max.” That he was saying it at the site of the battle that inspired the Star Spangled Banner just gave it more punch.

“The hard truth is…you won’t be safe in Joe Biden’s America,” he said, referencing protests that had gone on in Wisconsin since the Blake shooting. “Let me be clear: The violence must stop, whether in Minneapolis, Portland or Kenosha.”

Without mentioning Blake, George Floyd or Breonna Taylor, Pence chided Biden for tolerating the property damage that has sometimes occurred during social justice protests and said that it was something that the Trump/Pence administration would continue to crack down on.

“Last week, Joe Biden didn’t say one word about the violence and chaos engulfing cities across this country,” he said. He vowed to have “law and order on the streets of this country for every American of every race and creed and color.”

Pence also failed to mention the arrest of 17-year-old Kyle Rittenhouse, the Antioch, Illinois teen who was arrested Wednesday for allegedly killing two protestors and injuring a third during protests in Kenosha. Rittenhouse was a member of a youth police cadet program and had attended a Trump rally in Iowa, according to CNN. That Pence didn’t mention any of those killed by police by name or Rittenhouse during his speech, which also focused on the administration’s view of its work on the economy, the coronavirus pandemic and social issues in general, was on brand for a convention that showed for once and for all that the GOP is Trump’s party, lock, stock and barrel.

Most of the speakers were either members of Trump’s family, the President’s supporters in Congress, and others who were loyal to him. There were several African American and Latino speakers, including Maximo Alvarez, a Cuban speaker from Florida who compared Biden to Fidel Castro. For all intents and purposes, the true business of the RNC was done by Monday at around 2pm. The 300 Republican delegates present at a much smaller Republican National Convention in Charlotte, North Carolina voted unanimously to allow Trump and Pence to continue as the party’s standard bearers. This was a change from the 2016 convention in Cleveland, where a group called the Never Trumpers tried to change the convention rules and allow delegates who didn’t want to vote for Trump due to such things as the Access Hollywood tape to back out of it. The rules change didn’t pass, and these delegates walked out during the roll call vote.

Trump and Pence came to Charlotte in person to thank the delegates and to promise them four more years of what the two have already done for the country should they be reelected. During the meeting, it was announced that there would also not be any changes to the RNC’s 2016 platform, a decision that is unprecedented according to Nathan R. Schrader, an associate professor of government and politics at Milsaps College in Jackson, Mississippi.  But, Schrader said in an interview on the SUN’s Facebook Live show, “Late Night At the RNC,” it makes sense when you consider how the convention itself has been presented. Like, for example, the fact that “Republican National Convention” took second billing to Trump 2020 in all of the convention’s marketing.

“That branding was so intentional,” he said. “It’s hard to imagine that four years ago that there was this open pocket of opposition that was trying to keep Trump from taking over the party. Fast forward to where we are tonight, and this is no longer the Republican Party. This is the Donald Trump party. And he’s blatantly advertising that.”

If there was anything close to an empathetic moment, it came from First Lady Melania Trump. Speaking in a newly revamped White House Rose Garden, Melania offered condolences to the families of the nearly 180,000 people lost to the coronavirus, and also called for unity.

“I urge people to come together in a civil manner,” she said. “Instead of tearing things down, let’s reflect on our mistakes and look to a way forward.”

On Thursday, President Trump made his acceptance speech to 1,500 people in the same space where the First Lady spoke. The event was expected to be mask optional.