For 112-year-old veteran’s daughter, care is a labor of love 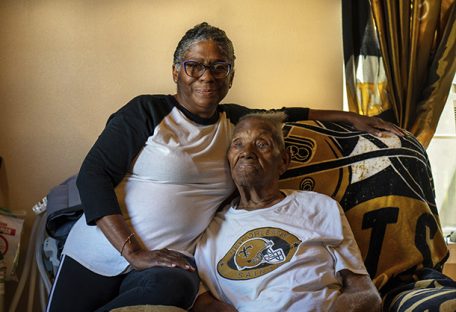 ABOVE PHOTO: Vanessa Brooks poses for a portrait with her father Lawrence Brooks in his room at their home in New Orleans on Friday, Sept. 8, 2021. Lawrence is the oldest living man in America and also the oldest living World War II veteran. (AP Photo/Kathleen Flynn)

Vanessa Brooks was gentle as she held the face of her 112-year-old father in her hands.

She patted the shaving cream carefully on his cheeks and along his jaw before sliding the razor across his face to make a clean strip.

Lawrence Brooks sat quietly in his big armchair in their double shotgun house, a New Orleans Saints blanket draped over the back. The oldest living U.S. veteran’s arms were clasped together in his lap and his eyes were closed. Around him were banners from the National World War II Museum and the Veterans Affairs hospital celebrating past birthdays. A portrait of him in his Army uniform, three-quarters of a century old, sat on the dresser.

“I want him to be comfortable, happy and himself,” Vanessa, 61, had said the day before, lying on the couch for a break in between feeding him and giving him therapy for his swelling legs. “If I can keep him in his right state of mind until God calls him home, that’s my intent.”

For the past 13 years, she has been her father’s primary caregiver, providing round-the-clock attention. It’s a full-time job, one she’s tried to balance with her work as a neighborhood security patrol officer — the job that pays the bills. But as her father has aged, that balancing act has become trickier.

The centenarian Brooks is still mentally sharp — he can tell decades-old stories of his childhood in Louisiana and rural Mississippi, of being drafted to join WWII. But his body is weak. Brooks’ hearing is becoming more limited, he has lost his sight in one eye, and his vision is fading in the other. Several hospitalizations in the past year have been taxing physically and emotionally.

Each day, Vanessa starts early, bringing him medications, cleaning him and his space, loading his wheelchair onto the electric lift when he has doctor’s appointments.

“Taking care of him, it’s sun-up to sundown,” she said.

Brooks recently qualified for a program that will allow a VA home-health care aide to come to their house during the day to help Vanessa. But she said there are a lot of personal care needs that he only feels comfortable with her attending to, keeping most of the responsibility on her.

In late September, Vanessa took indefinite leave from her job of nine years. Too young to begin collecting Social Security, she knows the loss of income will take a toll. But she considers caring for her father the most important job in the world.

“I don’t work, I don’t get paid — bottom line,” she said. “Basically, I just made that sacrifice. I just stepped out on faith and decided to do what I felt in my heart that I need to do, and that’s stay here and take care of my dad.”

A concerned friend set up a GoFundMe page to help support Vanessa and her dad while she cares for him at home.

The Brooks family isn’t alone in trying to juggle priorities. One in five full-time workers in the U.S. is a caregiver, according to a Rosalynn Carter Institute for Caregivers survey released last month. About 45% of family caregivers who are employed full time said they had to go part time at some point and roughly two in 10 said they had to quit their jobs altogether.

“It’s a very common story, and the people who are affected the most are those people who are in low wage, hourly wage jobs,” said Howard Gleckman, a retirement policy expert with the Urban Institute think tank.

A year ago, Vanessa shifted to part time. She had been working patrol shifts from 3 to 11 p.m. and contracted with an agency for an aide to care for the elder Brooks while she worked. But with a shortage of health care workers during the pandemic, the help was inconsistent.

She found herself increasingly exhausted and having to take more and more time off work to meet her dad’s needs.

“When I’m driving, I can’t really go out tired and exhausted, either, because I can injure myself or someone else,” she said. “I felt like I was in a tug of war.”

Even with an aide from the VA coming to help care for her father, she doesn’t think she can go back to work anytime soon.

A VA stipend program covers caregivers only for veterans who are suffering from service-related injuries.

Lawrence Brooks, who was in the mostly Black 91st Engineer General Service Regiment, never had a combat job, a legacy of racist policies that relegated many Black soldiers to service-oriented jobs in the then-segregated U.S. Army. Brooks was a caretaker for three white officers in Australia and was discharged in August 1945 as a private first class. When he left the service, he worked as a forklift driver before retiring in his 60s.

In May of this year, he had surgery, which required Vanessa to take time off to stay with him in the hospital. Then, two and a half months ago, her father had a fall. A doctor said he was suffering from a kidney infection.

She spent the past week caring for him after he was transferred to the VA hospital intensive care unit. The doctors said fluid had built up in his lungs, and his kidneys were again at risk.

When she tried to go back to work recently, her father became depressed and started regressing. He did not want to eat or drink water, she said. He is in his best health when she is able to stay home with him.

“That’s what makes him happy, and that’s what keeps him living,” she said. “It’s like, I am his lifeline. When I’m not around, he’s sad, he’s depressed, he falls into delirium.”

She said she and her father enjoy going out for chocolate frozen yogurt, watching television — especially sports, like wrestling and football — and playing solitaire.

He loves sitting on their porch directly in the sun. People from the neighborhood, who all know him by name, will wave and leave little treats for him.

“I just want him to have a good life,” Vanessa said. “He worked hard. He took care of our family. Now, I take care of him.”

Choosing health care benefits – a chore or a labor of love?