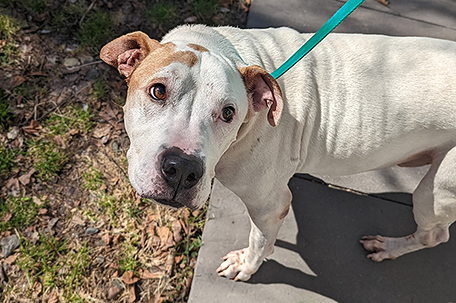 At 9-years-old, Dodger has seemingly had a “ruff” life. Nearly two months ago, this sweet senior was found walking along Kensington and East Allegheny Avenues. A Good Samaritan got out of their car and Dodger immediately approached – he was so excited and wiggly to see them.

Maybe Dodger was so happy because he knew he had been saved. Despite his wiggles and wagging tag, Dodger had a large wound on his chest that was actively bleeding. He must have been in so much pain, but all he wanted was to go along with his finder.

And that’s what he did. Dodger was brought to ACCT Philadelphia, but with one look at the gash to his chest, they contacted our Humane Law Enforcement team. They suspected the wound may have been the result of being slashed with a knife.

Dodger was immediately brought to the Pennsylvania SPCA’s Shelter Hospital. Our forensic veterinary team could not confirm whether Dodger had in fact been harmed with a knife, but they couldn’t rule it out either. It is likely that we may never know.

That said, we focused on  putting Dodger on the long road to recovery. He spent one month in our hospital’s isolation unit, underwent surgery to close his wound, and while it healed, fought off an ugly upper respiratory infection.

Despite everything, all Dodger wanted was to be with people. He cried when the nurses would finish his treatments and left the room. He had almost certainly been failed by a human, but still, all he wanted was to be loved by them.

And so, he was. And that love (and a lot of medical treatment) paid off – Dodger was released to our adoption floor on March 18. And that’s where he’s been ever since. He has recovered physically, but it isn’t easy to find a home for a senior dog. Nine years old isn’t that young for a dog his size, but we know he has so much life left, and has proven again and again how much love he has to give.

On $5 Friday, will you donate just $5 to help victims of cruelty and neglect like Dodger? And will you consider sharing his story to find him his people?  For more information, go to: www.pspca.org/ or [email protected].