EXPLAINER: States still in play and what makes them that way 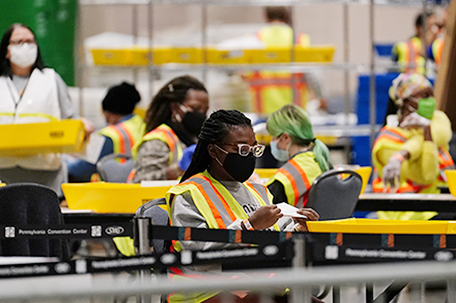 WASHINGTON — A handful of pivotal states remained in play Wednesday in the tightly contested U.S. presidential race. Here, The Associated Press reviews them and examines the reasons why they could still go to either Republican Donald Trump or Democrat Joe Biden:

GEORGIA: Outstanding ballots left to be counted in counties where Biden has performed well.

“It’s … clear that we have won Georgia. We’re up by 2.5%, or 117,000 (votes) with only 7% (of the vote) left” to count, Trump said during an early morning appearance at the White House. He also said he planned to contest the U.S. presidential election before the Supreme Court. It was unclear exactly what legal action he might pursue.

The race is too early to call because an estimated 4% of the vote remains to be counted. That includes mailed ballots from population-dense counties in the Atlanta metro region that lean Democratic. Biden is overperforming Hillary Clinton’s 2016 showing in those counties, including in their more upscale suburban reaches.

NEVADA: Race too early to call.

THE BACKGROUND: About 75% of the votes are in and Biden leads by less than 8,000 votes.

But there are outstanding ballots left to be counted in the coming days. Under state law, they can still be accepted so long as they were postmarked by Election Day, on Nov. 3.

Trump narrowly lost Nevada in 2016 as the state has trended toward the Democrats in the past decade. The last Republican presidential contender to win the state was George W. Bush in 2004.

THE BACKGROUND: Trump prematurely claimed early Wednesday that he won the state.

“We’ve clearly won North Carolina, where we’re up 1.7%, 77,000 votes with only approximately 5% left. They can’t catch us,” he said during an appearance at the White House. Trump also said he planned to contest the U.S. presidential election before the Supreme Court. It was unclear, exactly, what legal action he might pursue.

Though Trump is correct that he held a nearly 77,000-vote lead in the state early Wednesday, the race is too early to call with up to 116,000 mail ballots left to count, as well as the potential of thousands of provisional ballots.

As long as those ballots are postmarked by Nov. 3, state election officials have until Nov. 12 to count them. And when it comes to mail ballots, Biden was outperforming Trump. That means the ballots yet to be counted could give Biden a lead.

PENNSYLVANIA: More than 1 million votes left to be counted.

THE BACKGROUND: Pennsylvania is among a handful of battleground states Trump and Biden are narrowly contesting, and there were roughly 1 million votes left to be counted Wednesday afternoon.

“We’re winning Pennsylvania by a tremendous amount. We’re up 690,000 votes in Pennsylvania. These aren’t even close. It’s not like, ‘Oh, it’s close,’” Trump said during an appearance at the White House.

By Wednesday evening, his lead had slipped to about 239,000 — and the race is destined to get tighter.

One reason is because elections officials are not allowed to process mail-in ballots until Election Day under state law. It’s a form of voting that has skewed heavily in Biden’s favor after Trump spent months claiming without proof that voting by mail would lead to widespread voter fraud.

A final vote total may not be clear for days because the use of mail in ballots, which take more time to process, has surged as a result of the coronavirus pandemic.

Democrats had long considered Pennsylvania a part of their “blue wall” — a trifecta that also includes Wisconsin and Michigan — that for years had served as a bulwark in presidential elections. In 2016, Trump won each by less than a percentage point.

Biden, who was born in Scranton, claims favorite-son status in the state and has long played up the idea that he was Pennsylvania’s “third senator” during his decades representing neighboring Delaware. He’s also campaigned extensively in the state from his home in Delaware.