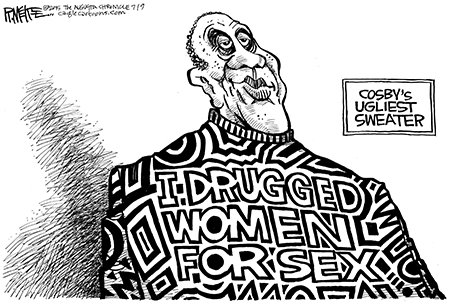 His admission that he used hallucinogens to make women more open to his sexual advances is based on what occurred 40 years ago. In addition, not only was such conduct pervasive back then, it was not illegal!  Furthermore, the woman who swallowed the drugs is a different woman from the one who brought the lawsuit which ignited this latest round of headlines.

It’s important to have these facts close at hand when discussing the latest salacious revelations about one of the country’s most famous comedians and philanthropists—Dr. William H. Cosby,Jr.—because what’s really at issue here is a criminal matter: Is he or is he not a serial rapist?

Cosby has never been criminally charged and has steadfastly denied all allegations of sexual misconduct.

As the media incessantly regurgitated stories connected to the release of portions of a deposition that Cosby gave 10 years ago, the issue of whether or not he is a serial rapist expanded exponentially, with many accepting the latest headlines as proof positive of his guilt. Each day last week seemed to further threaten to overcome the legacy of artistic achievement and immense financial generosity it took Cosby and his loyal wife, Camille, a half century to achieve.

By the end of the week, a petition had been launched to rescind the Medal of Freedom awarded him by former President George Bush and two black television networks, Bounce and Centric had cancelled all re-runs of the once celebrated “The Cosby Show.” A coalition of civil rights groups in Los Angeles has begun to pressure the Hollywood Chamber of Commerce to remove Cosby’s star on the celebrated Hollywood Walk of Fame. Next, came word that Disney was pulling a bust of Cosby from one its theme parks that honors pioneers in the television industry. Evicted from the “Wonderful World of Disney.” In the entertainment universe, can it get much worse?

Possibly yes, as the Montgomery County prosecutor who elected not to bring criminal charges against Cosby based on accusations from the woman–Andrea Constand–who filed the lawsuit, had begun to change his public position on possible next steps in the case. By midweek he was postulating that rape charges may not be possible because of the statute of limitations, but perjury—punishable by up to seven years in prison—was legally applicable if anything Cosby said in the deposition conflicts with statements he made during the criminal investigation.

And late last Wednesday, Constand, a former Temple University athletic department worker, had petitioned a federal judge here to void a confidentiality agreement in her settlement deal with the actor-comedian, asking for the full release of Cosby’s deposition rumored to be some 60 pages long.  Stepping back from the emotionally explosive content of the few pages of the deposition made public so far, the judge’s decision to unseal even a portion of the document raises many thorny issues about the loss of privacy.

Citing Cosby’s own words from past speeches about the family conditions many low-income African Americans have adopted, the judge branded Cosby a “public moralist” whose utterances and alleged improper conduct should be open to public inspection. It was a major victory for transparency by the Associated Press which had brought the action to unseal the documents. From a strictly legal point of view though, does this same logic apply to a minister or rabbi, or college president or teacher who publicly declares a particular position only to be sued years later in an unrelated matter. Will courts have the right to arbitrarily uncover their deeds or misdeeds?

To be perfectly honest, black and white people over the age of 40 view this sorrowful saga through race-based lenses. African Americans, so long denied film and TV heroes, were overjoyed in the 1980s at the upper middleclass doctor-led household, Cosby created in his Cliff Huxtable television character. Thus, it’s understandable when CNN’s Roxanne Jones scolds Cosby for “betrayal” of the black community who has “dragged us all down. While preaching from his pedestal about the ills among the black lower and middle class, he was using his money and power, his accusers say, to sexually exploit women who were less powerful and had less money.”

Cosby’s white fans were equally thrilled to see a black actor who “had made it,” but who wasn’t angry or threatening to the status quo. The result was the most popular sitcom in decades that went on to continue to suck up ad revenues in syndication to where Cosby, rumored to be worth $400 million, actually had a serious bid (not that long ago) to buy the NBC network.

Cosby’s extraordinary wealth also was instrumental in persuading many of his alleged victims from pursuing criminal allegations earlier, argue many of his detractors today. His persistent use of scholarships to women who had accused him of sexual improprieties were powerful inducements not to report his conduct to legal authorities.

Without the strict rules and procedures of a criminal trial the public may never by privy to a complete answer to such questions. In the end, we may be left with what we have now—a tarnished hero whose silence foreclosed his redemption.