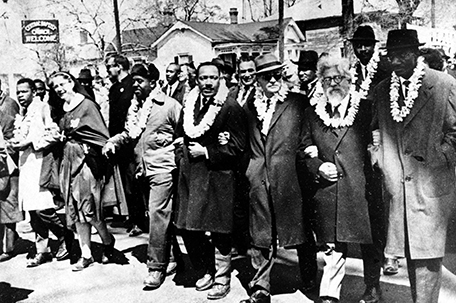 ABOVE PHOTO: Dr. Martin Luther King Jr. links arms with other civil rights leaders as they begin the march to the state capitol in Montgomery from Selma, Ala. on March 21, 1965. The demonstrators are marching for voter registration rights for blacks. Accompanying Dr. Martin Luther King Jr. (fourth from right), are on his left Ralph Bunche, undersecretary of the United Nations, Rabbi Abraham Joshua Heschel, and Rev. Fred Shuttlesworth. They are wearing leis given by a Hawaiian group. (AP Photo)

“After decades of struggle and a year of our leaders choosing the Jim Crow filibuster over our voting rights, our time is now. On this day of action, I call on Congress and the White House to eliminate the filibuster and pass voting rights to protect millions of Black and Brown voters. The arc of the moral universe is long. Join me on January 17 to demand that it bends toward justice.” — Martin Luther King III

More than five and a half decades ago, Martin Luther King, Jr., led 2,000 marchers to the Edmund Pettus Bridge in Selma, Alabama, where they knelt and prayed for an end to voter suppression. This MLK Day, his children will lead marchers to the Frederick Douglass Memorial Bridge in Washington, D.C., to culminate a weekend of action in defense of democracy.

Throughout MLK Day weekend, marches will take place around the nation on bridges, not only to recall the 1965 Selma to Montgomery marches and the historic “Bloody Sunday” attack on the Edmund Pettus Bridge, but also to contrast lawmakers’ inaction on voting rights with their success in enacting a $1 trillion infrastructure measure for roads, airports, seaports, and bridges.

The actions will call on President Joe Biden and the Senate to urgently pass federal voting rights legislation, including the Freedom to Vote Act and the John Lewis Voting Rights Advancement Act, and ensure the Jim Crow filibuster doesn’t stand in the way.

Dr. King’s legacy reminds us that our right to vote was not easily won and it must be vigorously defended. It is a right that is foundational to our democracy. Last year, we saw what happens when we make voting more accessible for all, and we were inspired.

Those unpatriotic members of state legislatures who would seek to undermine voting rights saw it too, and it scared them.

The Freedom to Vote Act expands opportunities to vote, thwarts voter suppression, limits partisan gerrymandering, prevents election sabotage, and promotes election security.  The John R. Lewis Voting Rights Advancement Act would restore a requirement in the Voting Rights Act that jurisdictions with recent histories of discrimination secure federal “preclearance” before altering their voting laws and will enhance the ability of the U.S. Department of Justice and other stakeholders to challenge discriminatory voting laws.

President Biden and members of Congress can no longer stand by and allow American democracy to crumble.

They must set a new national standard for voting and restore the Voting Rights Act of 1965 to its full strength, even if that means reforming or eliminating the filibuster. Standing on the shoulders of Dr. King, Coretta Scott King, Whitney M. Young, and many others, we must hold them accountable for doing so.

The MLK Day mobilizations will begin in Arizona on January 15, Dr. King’s birthday, where the King family and local groups will rally supporters across Phoenix, in alignment with the Arizona Martin Luther King Jr. Celebration Committee.

On January 17, the family and hundreds of others will cross the Frederick Douglass Memorial Bridge and join the annual D.C. Peace Walk: Change Happens with Good Hope and a Dream.

For more information about the weekend of mobilizations, visit: www.deliverforvotingrights.com.