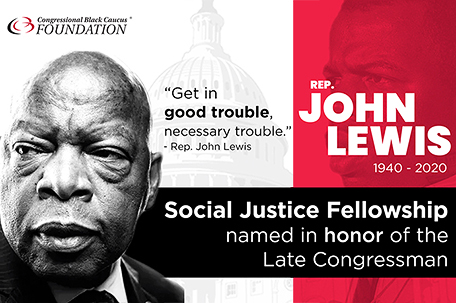 *Applications are now open for the John R. Lewis Social Justice Fellowship. For more information on this opportunity and the National Racial Equity Initiative for Social Justice, visit: cbcfinc.org/nrei.*

WASHINGTON — CBCF President and CEO, Tonya Veasey and Board Chairman, Rep. Cedric Richmond have announce that the National Racial Equity Initiative for Social Justice fellowship program will bear and honor the name of the late Congressman John R. Lewis. The CBCF Board of Directors, Corporate Advisory Council and staff mourn the immense loss of Rep. Lewis who passed away on July 17.

“Congressman Lewis was a leader and a legend who dedicated his life and career to the pursuit of racial and social justice,” Richmond said. “It is an honor to offer this opportunity to social justice leaders who will now carry the torch so brightly lit by Rep. John Lewis. We are excited for the work to come by the John R. Lewis Social Justice Fellowship candidates in advancing the global Black community.”

A pillar of the Congress

“Rep. Lewis was the exuberance of the Civil Rights Movement and a pillar of the Congress,” said Veasey. “His work and personal sacrifices helped to build the democracy we have today, and he worked until the time of his passing to challenge the injustices present and prevalent today. We are reviewing an impressive slate of applications and we are excited to welcome public servants this fall who are dedicated to the ongoing demand for equity.”

“So help me God, I cannot do anything less. We are fighting to end segregation and racial discrimination,” said Lewis in a 2013 CBCF AVOICE (African American Voices in Congress) presentation.

Lewis told CBCF interns in 2019, “We are not going back.” This mantra described his determination to march for voting rights on Bloody Sunday, and his lifelong commitment to causing “good trouble” to advance toward equal and equitable rights for all.

Lewis was elected to Congress in 1986 and he was the senior ranking member of the Congressional Black Caucus. He was often referred to as the “conscience” of the United States Congress. Lewis was a freedom fighter and pioneer in the Civil Rights Movement. As chairman of the Student Nonviolent Coordinating Committee (SNCC), he served as the youngest speaker at the 1963 March on Washington for Jobs and Freedom. In 2011, then President Barack Obama awarded Lewis the Presidential Medal of Freedom, the nation’s highest civilian award. The John Lewis Legacy Award, introduced in 2018, is among the honors presented each fall during the CBCF Annual Legislative Conference. This award is presented to an individual who has demonstrated a longstanding commitment to social justice and civil rights advocacy.

The CBCF joins those saddened across the nation and the world in expressing our deepest condolences to the family, friends, colleagues and constituents of Congressman John Lewis. May he rest in power.

Applications are now open for the John R. Lewis Social Justice Fellowship. For more information on this opportunity and the National Racial Equity Initiative for Social Justice, visit: cbcfinc.org/nrei.