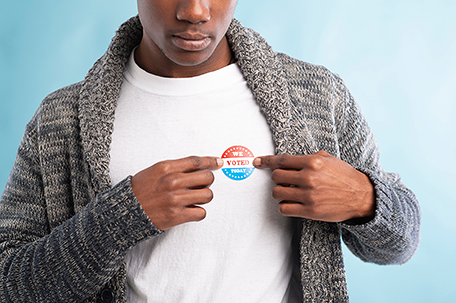 According to a national exit poll, Pennsylvania’s Black voters really flexed their muscles in the 2020 Elections.

On Election Day, then-Democratic presidential candidate Joe Biden spent part of the day going into Black neighborhoods in Philadelphia to campaign and connect with voters that he hoped would help him reach his electoral goal.

According to a new poll, Biden’s efforts paid off, particularly in Pennsylvania.

The 2020 American Election Eve poll shows that Black voters really made themselves heard in the presidential elections. It also showed that while President Donald Trump managed to gain some traction with voters of color overall, and Black voters in particular, it wasn’t a game changer.

The national poll emphasized battleground states — Florida, Georgia, Michigan, Texas, Ohio, Pennsylvania, North Carolina, Wisconsin and Nevada — and, unlike many polls, had a larger sample size of people of color who had either already voted or were likely to vote, said Roy Block, senior research analyst for the African American Research Collaborative.

In Pennsylvania, more than nine out of every 10 Black voters [93%] cast their vote for Biden, with seven out of 10 voting specifically for Democrats, according to the poll, said Block, who is also an associate professor of political science at Penn State University.

A combination of pragmatism and familiarity guided these voters, Block said.

“African Americans who vote strategically are sometimes criticized for it,” he said. “Or they’re accused of blindly voting for Democrats. Black voters consolidated their votes around Biden because Black voters saw that their best chance of changing things in the White House was through him.”

Among the reasons why Blacks felt able to trust Biden was his choice of running mate. While the 2020 Election wasn’t all that inspiring for a lot or reasons, the addition of California Sen. Kamala Harris made things a little more interesting, Block said.

“The Harris pick put this voting block into play,” he said. “Some voters got more excited once Harris was on the ticket.”

But prior to the election, more than a few prominent Black men expressed concern about the Biden campaign’s outreach, or lack of outreach, to that group. Throw in the overtures that Republicans made to rappers Ice Cube and Lil Wayne and Kanye West’s appearance on the ballot in several states, and the perception became that Black men could cancel out the votes of Black women.

That didn’t happen, Block said. In fact, there wasn’t a whole lot of divergence between the two groups, according to the poll.

“If you look at the information we have, there are gender gaps,” Block said. “But contrast it with white voters. In Pennsylvania, 59% of white men voted for Trump and 53% of white women voted for him too. Both sets of numbers are similar to the number from the 2016 election. Non-white voters largely went for Biden.”

In addition to looking at the vote itself, the 2020 American Election Eve Poll also looked at the issues most important to voters. Among Black voters nationwide, the coronavirus pandemic took center stage, and it was no different in Pennsylvania. About 56% of Black voters in the Commonwealth picked the pandemic as their top issue.

There were also some results that some might perceive as surprising. While police reform was an important issue to 36% of Pennsylvania’s Black voters, they, like Black voters nationwide, didn’t necessarily want to see police departments defunded completely due to public safety concerns.

But when asked if they would like to see some of the funding that’s currently used in policing redirected to things such as violence prevention programs and social workers that could help keep the police from having to handle mental health issues, Black voters were in favor of those things, according to the poll. The disparate answers to this question in this poll show the importance of using nuance and not politics to ask about such things as police reform, Block said.

“Police reform is one of those subjects that you can’t talk about in a binary way,” he said. “When you take the nuance out of it, it does disservice to the issue.”

In addition to Block and the African American Research Collaborative, the researchers at Latino Decisions and Asian American Decisions conducted the poll. About 15,000 likely voters participated in the poll nationwide and an emphasis was placed on making sure that people of color were represented in the sample, Block said.

Much has been made in the past couple of election cycles about polling being incomplete when it comes to communities of color, Block said. This poll helps to correct that.

“I don’t see us represented from a theory or a data standpoint in public opinion polls,” he said. “Because of that, it’s hard to trust them. We feel good about what we found out regarding people of color because we asked them for their opinion. This data isn’t as accessible as it should be. If that data becomes more regularly available, it can become part of the political discourse.”

To see all of the results of the 2020 American Election Eve poll, visit: https://electioneve2020.com.