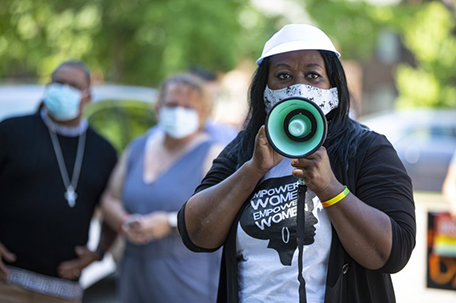 ABOVE PHOTO: Jeannine Lee Lake, Democratic candidate for Indiana’s 6th congressional district, speaks to the crowd gathered for Juneteenth day event in Columbus, Ind. The reenergized movement against racial inequality and police brutality following the killing of George Floyd in Minneapolis has amplified the voices of Black candidates across the country. Among them is Lake, who is challenging Rep. Greg Pence, the vice president’s brother, in a deeply conservative Indiana district. (AP Photo/Michael Conroy)

By Sara Burnett And Casey Smith

COLUMBUS, Ind. — It was a scene Jeannine Lee Lake never would have imagined when she first ran against Greg Pence, Vice President Mike Pence’s brother, for a rural Indiana congressional seat two years ago: an almost entirely white crowd of more than 100 people marching silently in the Pences’ hometown this month, offering prayers for Black people killed by police and an end to systemic racism.

Leading them was Lake, who is in a rematch against Pence. She is the only Black woman running for federal office in Indiana this fall.

The Democrat, who lost badly in 2018 and again faces long odds in the deeply conservative district, has spent much of the past few weeks at events such as the one in Columbus on Juneteenth. In communities across a district that is 93% white, Lake has talked about seeing her children pulled over by police and “harassed for no reason.” She has spoken the names of George Floyd, Breonna Taylor and other Black people killed by police, telling crowds “we’re here to call for change.”

“In no way, shape or form is 2018 the same as the 2020 race in regard to the grassroots effort and the galvanization of the movement that is now Black Lives Matter,” said Lake, 50. “It’s just a total shift.”

The reenergized movement against racial inequality has amplified the voices of Black candidates, in some cases pushing the political debate over race into Republican-leaning areas. Democrats say they’ve seen a significant boost in fundraising and other engagement for candidates running on racial justice issues, and believe it could help the party flip some Republican-held districts in November. Polls show usually broad bipartisan support for some change to the nation’s criminal justice system. But lawmakers in Washington are at an impasse after far-reaching federal legislation passed the Democrat-led House on Thursday over objections from Republicans. Pence voted no, saying he opposes changes to the qualified immunity system that shields officers from liability.

In Arkansas, Democratic state Sen. Joyce Elliott says she’s seeing new momentum in her bid to unseat GOP Rep. French Hill and become the state’s first Black woman elected to Congress. She began running digital ads shortly after Floyd’s death last month. In them, she spoke about her experience integrating a school in the 1960s where she and other Black students weren’t wanted.

It was the kind of fundraising appeal that typically would bring in about $1.50 for every $1 a congressional campaign spent on the ad buy. This ad cost Elliott’s campaign about $2,500 and raised $24,000 within one week, said Julia Ager, president of Sapphire Strategies, the digital firm for Elliott’s campaign. Other Black candidates are seeing a similar trend, she said.

“The environment is different, and that environment has created a boon of support,” Ager said. For people who are tired of inaction and want to see more Black people in Congress, “it seems like a clear place to direct money.”

Elliott, 69, has also been traveling to Black Lives Matter protests around the district, which includes Little Rock and its suburbs and has been represented by a Republican for more than a decade. Because of the COVID-19 pandemic, the kidney donor speaks to crowds from the back of a pickup truck, often to predominantly white audiences. She tells her story of overcoming adversity, mentioning the people in school who didn’t want her or other Black students there. At one recent event, the crowd gathered in the shadow of a Confederate statue, where the discussion turned to trying to have it removed.

After a lifetime of feeling like she had to “push, push, push,” Elliott said, “now it feels like this is a big warm embrace.”

Her campaign has been backed by EMILY’s List, which supports women in politics, and the Congressional Black Caucus PAC.

“I’m feeling now as if a door has opened,” Elliott said. “People can look at someone like me and say, ‘Why not Joyce Elliott? Isn’t she the right person for this moment?’”

In North Carolina, Democrats saw Pat Timmons-Goodson as a strong candidate for a newly redrawn congressional district held by Republican Rep. Richard Hudson even before the discussion over policing and racial inequality was reinvigorated.

Timmons-Goodson was the first Black woman on the Supreme Court of North Carolina and served on the U.S. Commission on Civil Rights, where she helped write recommendations on policing. In 2016, President Barack Obama nominated her to the federal court, though the nomination was among those blocked by Senate Majority Leader Mitch McConnell, R-Ky., and other Republicans.

Timmons-Goodson received national attention during that debate, as the seat on the court was left vacant for years and became part of a national fight over the courts. But her campaign says support for her candidacy exploded in recent weeks. Timmons-Goodson reported fewer than 1,000 individual contributions for the first quarter of 2020. In the quarter that ends Tuesday, the campaign expects to report some 20,000 contributions.

Lake may have a tougher fight ahead in Indiana, but she’s had to order more campaign signs and more than doubled her ranks of campaign volunteers. Pence’s campaign largely ignores her bid.

Other Black activists tell Lake they’re considering running for office, too. Her campaign also is organizing “Candidates for Change” events, which will be held in more than half the district’s 19 counties and will focus on issues of policing, inequality and systemic racism — conversations that may not have occurred before in some places. Even as the pandemic has canceled much campaigning, the protests have gone on.