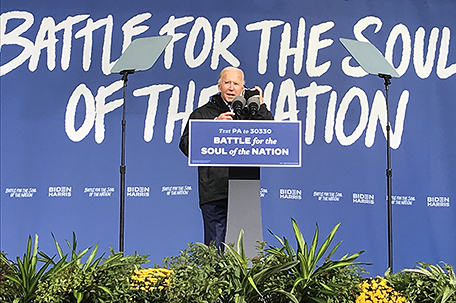 During one of his final campaign stops in Philadelphia, President- elect, Joe Biden, told countless citizens at a drive-thru rally that if he were elected president he would take action on the very first day to get covid under control, the U.S. economy back on track, and deliver racial justice in America.

“We got a lot of work to do,” said Biden. “If I’m elected your president we’re going to do it and we’re going to act and start from the very first day.”

According to Biden, the way that the Trump administration has handled covid is almost criminal and that under his administration they will get it under control.

“On day one of my presidency, I’m going to put into action a plan I’ve been talking about for months; masking, social distancing, testing, tracing a plan for full and fair, free distribution of therapeutics and vaccines when we get one,” said Biden

Biden said “this plan will address the disproportionate way this virus has been hitting and devastating the Black community across America.”

“Every single day we are seeing race based disparities in every aspect of this virus,” said Biden.

African Americans are dying at a rate three times higher than White Americans when they get the virus.

“One in 1,000 Black Americans have died from COVID-19 and if we don’t change, between now and January it is estimated that one in 500 by the end of this pandemic,” said Biden.  “That is a massive casualty event in the Black community and it’s totally unnecessary, totally uncalled for,”

“My public health plan will ensure that the needs of communities that are being hit the hardest by this virus. [They] are a priority and not an after-thought.”

Biden warned that President Trump was terrified of what will happen in Pennsylvania. Five days after Tuesday’s election the state flipped blue after thousands of mail-in ballots were tallied.

“It’s time for Donald Trump to pack his bags and go home,” he said.

Biden stated in his address at the Sharon Baptist Church in Philadelphia, that the American people are “tired of the tweets, the hate, the failure, and the irresponsibility.”

“We’re going to have to plan to get our economy back on track. Not get back to where we were but to build back better,”said Biden.

“The American people have seen how bad things are.  To make it easy to start a business, to buy your first home, to pursue an education after high school without being burdened with debt, to invest in HBCUs that do so much to mold Black leaders for tomorrow,” he said.

He went on to say that his next deliverable will be bringing racial justice in America.

“I’ve seen all the protests here in Philadelphia and across the country — a cry for justice,” said Biden.

“Folks protesting is not burning or looting, and violence must never [be] tolerated and won’t, but the names of George Floyd, Breonna Taylor, Jacob Blake, and  Walter Wallace Jr. they will not [or] should not be forgotten,” he said

“Because here is what they’re going to do, they’re inspiring a new way of justice in America,” said Biden.