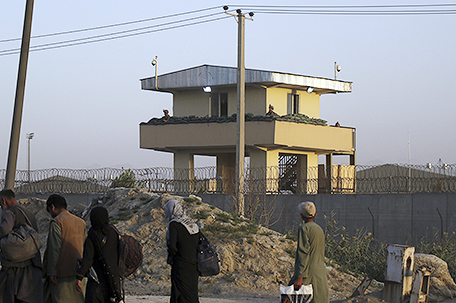 ABOVE PHOTO: U.S soldiers stand guard at the airport tower near an evacuation control checkpoint during ongoing evacuations at Hamid Karzai International Airport, in Kabul, Afghanistan, Wednesday, Aug. 25, 2021. The Taliban wrested back control of Afghanistan nearly 20 years after they were ousted in a U.S.-led invasion following the 9/11 attacks. Their return to power has pushed many Afghans to flee, fearing reprisals from the fighters or a return to the brutal rule they imposed when they last ran the country. (AP Photo)

WASHINGTON — The attacks that killed at least 12 U.S. service members outside the Kabul airport Thursday left President Joe Biden with increasingly fraught choices: continue the evacuation and risk more deaths or end it earlier than planned and risk leaving behind Americans who are still seeking to leave the country.

As details of the attacks emerged, the White House rescheduled Biden’s first in-person meeting with Israel’s new prime minister and canceled a video conference with governors about Afghan refugees arriving in the United States.

Biden had pledged to get out of Afghanistan every American who wished to leave. As of Wednesday, the State Department said about 4,500 American citizens had been flown out, with about 1,500 yet to go.

Biden on Thursday was to host Israeli leader Naftali Bennett, who is on his first visit to the United States since taking office. The meeting was rescheduled for Friday. Biden also had planned to meet virtually with a bipartisan group of governors who have said they want to help resettle Afghan refugees fleeing their now Taliban-ruled country. A regular briefing by government health and medical experts also was postponed.

The deadly developments in the Afghan capital of Kabul forced the White House to tear up Biden’s schedule. He was monitoring the airport situation, which was prompted by the upcoming Tuesday deadline he set for removing American citizens and troops from Afghanistan.

A number of U.S. allies said they were ending their evacuation efforts in Kabul, at least in part to give the U.S. the time it needs to wrap up its evacuation operations before getting more than 5,000 U.S. troops out by Tuesday.

Suicide bombers and gunmen targeted crowds massing near the Kabul airport in the final days of the massive airlift that has drawn thousands of people seeking to flee the Taliban takeover of Afghanistan.

At least 12 U.S. service members were killed in the bombings, including 11 Marines and one Navy medic, according to two U.S. officials. Officials say a number of US military troops were wounded. They warn, however, that the numbers may grow. The officials spoke on condition of anonymity to discuss ongoing operations.

A U.S. official said the attack was “definitely believed” to have been carried out by the Islamic State group, whose affiliate in Afghanistan grew out of disaffected Taliban members who hold an even more extreme view of Islam.

In Washington, House Republican leader Kevin McCarthy of California called for Speaker Nancy Pelosi (D-Calif.) to bring the chamber back into session to consider legislation that would prohibit the U.S. withdrawal until all Americans are out of Afghanistan. Such a return is highly unlikely because Democrats aligned with Biden hold majority control.

Despite intense pressure to extend the Tuesday deadline, Biden has repeatedly cited the threat of terrorist attacks against civilians and U.S. service members as a reason to keep to his plan.

The explosions detonated as the U.S. worked to get remaining Americans out of the country. Secretary of State Antony Blinken said Wednesday that as many as 1,500 Americans may be awaiting evacuation.

Asked during an interview with ABC News about reports the evacuation could end on Friday, Ross Wilson, the U.S. ambassador to Afghanistan, declined to comment.

Wilson said “there are safe ways to get to” the airport for those Americans who still want to leave. He added that “there undoubtedly will be” some at-risk Afghans who will not get out before Biden’s deadline.

The airlift continued Thursday despite warnings of vehicle-borne bomb threats near the airport. The White House said 13,400 people had been evacuated in the 24 hours that ended early Thursday morning Washington time. Those included 5,100 people aboard U.S. military planes and 8,300 on coalition and partner aircraft. That was a substantial drop from the 19,000 airlifted by all means the day before.