As mail voting pushed, some fear loss of in-person option 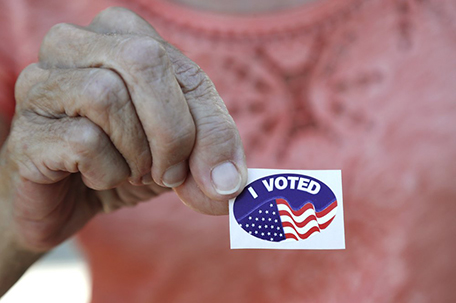 ABOEV PHOTO: Fran Drago shows her sticker after she voted in the Florida presidential primary in Cape Coral, Fla. Scrambling to address voting concerns amid a pandemic, election officials from Nevada to Florida are scaling back or eliminating opportunities for people to cast ballots in person. (AP Photo/Elise Amendola, File)

By Christina A. Cassidy And Nicholas Riccardi

ATLANTA  — Scrambling to address voting concerns during a pandemic, election officials across the country are eliminating polling places or scaling back opportunities for people to cast ballots in person — a move raising concerns among voting rights groups and some Democrats who say some voters could be disenfranchised.

In Nevada, election officials will open only one polling place per county for its June primary. In Florida, county officials warn they may have to consolidate polling places across the state. In Ohio’s primary next week, only the disabled and the homeless will be allowed to vote in person.

The closures come as many state officials are encouraging voters to vote by mail — and expanding opportunities to do so. Many election officials and health experts see mail-in and absentee voting as the best way to keep voters from spreading the coronavirus and to address a shortage of poll workers who are able to work without risking their health.

But advocates say some states are moving so quickly to embrace the shift to mail that they are not doing enough to accommodate certain voters, including the disabled, people who lack regular mail service, groups with little history of absentee voting or those who are simply unable to keep up with last-minute election changes and mail-in deadlines.

“Not everyone can or should vote by mail,” said Stacey Abrams, a former Democratic candidate for Georgia governor who now runs Fair Fight Action, a voting rights group.

The concerns over polling places largely have been overlooked in the fight over voting rights during the outbreak, which has so far centered on partisan disputes over mail-in and absentee voting. Democrats and voting rights groups have filed lawsuits seeking to expand mail and absentee voting options and pushed for an extra $2 billion to help states adjust their election systems. National Republicans are fighting those efforts, while President Donald Trump claims without evidence that mail-in voting is vulnerable to fraud.

But the challenge of securing in-person voting may prove just as contentious and just as likely to curb voter participation in the upcoming primaries, which are largely viewed as a dry run for November. In the chaotic recent Wisconsin election, where voters waited for hours to cast ballots, one expert estimated that the closure of polling sites in Milwaukee and other cities may have kept as many as 100,000 people from casting ballots.

Last week, Democrats sued Nevada’s top election official, a Republican, for limiting each county to a single polling location during the state’s June 9 primary, alleging that will channel 87% of the state’s voters into only two locations. Democrats, who count on big turnout at the polls in the populous county that contains Las Vegas, also sought changes to make mail voting simpler in a state where the overwhelming majority normally vote in person. A conflict is also brewing in swing state Florida, where the nonpartisan county election coordinators have asked Republican Gov. Ron DeSantis to loosen rules on early voting and allow the consolidation of precinct polling stations for elections in August and November. Democrats fear that polling places may close in Palm Beach and Broward counties, two dense areas that are their bases in the state. “Any diminution of access by reducing precincts or whatever should be avoided as much as possible,” said Terrie Rizzo, the chair of the Florida Democratic Party.

But the rush to eliminate in-person voting can be bipartisan. Democrats’ party-run primary in Wyoming was conducted exclusively by mail, as was the one in Alaska. Party officials said they took steps like allowing same-day registration that help compensate for lack of in-person options. Kansas Democrats agreed to eliminate polling places for their May primary. Party chairwoman Vicki Hiatt said in-person voting sites were “going to be too risky.”

Advocates acknowledge election officials are in a difficult position and support an increase in vote by mail for those who want it. But in-person voting, they say, provides an important “fail-safe” in the event of errors or mail delivery issues.

“I really don’t buy the argument that it can’t be done safely because grocery stores are open now, essential businesses are open right now,” said Sylvia Albert of Common Cause. “The businesses that are open now are considered essential and voting is essential.”

According to a new report from the liberal Center for American Progress and the NAACP, African-Americans are particularly reliant on in-person voting. In 2018, only 11% cast a ballot by mail — less than half the rate of whites and Latinos.

Ohio’s April 28 primary eliminates in-person voting for all but those with disabilities or those without a home address. Anyone who fails to request an absentee ballot before the deadline or whose absentee ballot doesn’t arrive in time would not be able to vote in person.

That may include Katie Brickner, 39, who lives in a Cleveland suburb. Her absentee ballot application was returned to her last week as undeliverable after water somehow damaged the front of the envelope after she dropped it off with the post office. She immediately mailed another but is worried about getting her ballot back after hearing reports that it’s taking a few weeks for applications to be processed.

“I will have no voice in the election and it’s really important to me this year,” she said.

In Maryland, state election officials were poised to cancel in-person voting but decided to keep at least one polling place open in each of the state’s 24 counties after voting rights groups raised concerns.

In Idaho, state election officials said it “simply was not safe for voters, election workers or the larger community” to hold in-person voting for the May 19 primary. The state is mailing absentee ballot applications to voters who haven’t requested one and has partnered with local grocery stores who will be providing stamps for those who need them to return their completed ballots.

Still, the decision to eliminate in-person voting could still pose a barrier for some tribal members in the state. One county has reported the number of absentee ballot requests coming from the Shoshone-Bannock Tribes in southeastern Idaho as “critically low,” according to Randy’L Teton, tribal spokeswoman. Teton worries the process for requesting an absentee ballot may pose a challenge for those used to voting in person.

“We’re going to need to explain this or delegate a family member that can help their grandma or grandpa on how to get through this,” Teton said.