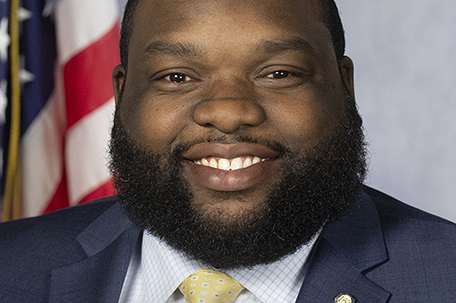 On Monday, Pennsylvania’s Electoral College delegates met in Harrisburg. And so did the Republicans.

As the Minority Whip for the Pennsylvania House of Representatives, State Rep. Jordan Harris knows his way around the chamber when he goes to Harrisburg for his job. He has his own parking spot. There’s a common entrance that he and the other legislators go through. When there isn’t a pandemic moving through the chamber — several members of the House, including Harris, have contracted COVID-19 — the public can come in and see its government at work.

But thanks to a combination of coronavirus and the contention of some supporters of President Donald Trump that the results of Pennsylvania’s elections were fraudulent, he had to do some things differently when he joined his fellow members of the Electoral College to cast Pennsylvania’s 20 electoral votes, Harris said.

“We had to park in another building, were put in a van, and were given a police escort,” he said. ”We were taken to the forum where [the Electoral College meeting] was held and because of increased security, the only people really allowed in the building were college members and essential staff. Part of that was COVID, but it’s also a need for security.”

“In that vein, it was definitely not just another day at work,” Harris continued. “But as a Black man voting for a Black woman to become vice president, it was historical.”

As expected, the 20 members of the Electoral College in Pennsylvania voted to send former Vice President Joe Biden and California Sen. Kamala Harris to the White House as the president and vice president-elect.

But as it was around the country, Republicans in Harrisburg also met for the purpose of voting for their own slate of unofficial electors. According to a statement issued by the Pennsylvania Republican Party quoting Trump campaign chair Bernie Comfort, the move was made for legality’s sake.

”We took the procedural vote to preserve any legal claims that may be presented going forward,” he said.

The legal claim Comfort and Republicans were referencing was the election of John F Kennedy in 1960. In 1960, a group of Democratic electors from Hawaii cast Electoral College votes despite Richard Nixon appearing to have won the state by 141 votes. The difference here is that there was a recount going on in Hawaii that would ultimately award the state and its electors to Kennedy, so when both sets of electors were sent to Congress, Nixon disregarded the Republican slate. There is no such issue in Pennsylvania, which the Biden/Harris ticket won by 81,000 votes. So, the fact that the Republicans took the time to do this was a slap in the face to those who took the time to vote, State Rep. Harris said.

“In my lifetime, that’s never happened,” he said. “I hope that the public sees their actions and holds them accountable. The people have spoken and lawsuit after lawsuit has been thrown out. You have to listen to the people.”

The last step in the process comes on Jan. 6, 2020 when the slates of electors are given to Congress to verify.

“It’s powerful to know that I signed a document yesterday that will go to the National Archives and be a part of history forever,” he said. “I thought about my great, great, great grandfather who fought in the Civil War as a former slave. So, I felt it.”