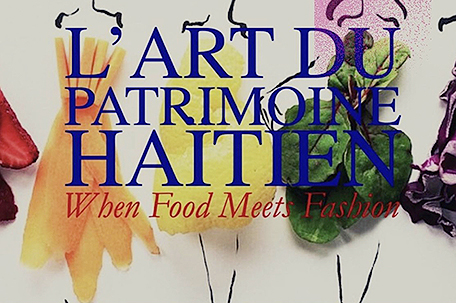 Fashion and the culinary arts have a lot in common. Both mediums allow the artists behind them to express themselves freely. Wearable art and culinary art also are sources that bring people together from all over the world.

Fashion and food brought Haitian born designer Prajje Osar and Haitian born chef Sylva Senat together. The two creative minds are partnering for a one night only event called “L’art Du Patrimoine Haitien: When Food Meets Fashion.” Oscar and Senat recently spoke with the SUN about their exciting upcoming function.

Senat’s love for cooking was influenced largely by growing up in a Haitian household. He began putting that passion into action by taking a culinary class in high school. He is currently the executive chef at The Pyramid Club.

“I was thinking ahead, thinking of college, so I took an elective class and found that I enjoyed it.,” Senat said. “It made sense to me and I was breezing through some of it, and the teacher noticed. She started signing me up for culinary scholarships and I started winning them. At 17, I ended up at the Sign of The Dove doing my internship, which was unheard of at that time. It kind of stuck from there.”

Oscar, who also has skills in the kitchen, spoke about the similarities shared between Senat’s art form and his own.

“We’re both creatives,” Oscar said. “There’s always that sauce. Either you’re designing clothes or if you’re making food, you’re still trying to bring it… so I guess that binds the two of us. Fashion brings people happiness and so does food. As much as I love fashion, I love food, so this is the perfect marriage for Prajje!”

Oscar and Senat were introduced by a mutual friend, who saw a great opportunity to maximize their synergies.

“We met through our friend Rhonda Willingham, who was happy to be our publicist,” Senat said. “She knows the energy that Prajje has, and said, ‘you have to meet Prajje from Project Runway.’  We instantly connected. I think artists and creatives feed off of other artists. When you see someone going for it you’re happy for them and it brings it back out of you. If you’ve ever seen this man’s studio — the colors, the patterns — it’s instant creation and imagination, and it gets you going.”

Oscar and Senat also share a background in reality TV. Oscar came in 8th place in Season 19 of “Project Runway,” while Senat placed 4th in Season 14 of “Top Chef.” They each shared what they learned from their experiences.

“For me, it was a humbling experience, because being on tv put me into a perspective about what I wanted for the foreseeable future,” Senat said. “I think cooking for me was always super passionate and involved. Later on, as I was watching myself on TV, it was like I could’ve been more open and friendly. It made me want to look at my life and career as a whole.”

“Being on the show brought all of these emotions with finding out who you are, perspective and really committing to the tasks of why I went there,” Oscar said. “I went on the show to fulfill my dream, but at the same time I know that by me being up there I’d be able to carry on with the conversation with my culture and change the narrative — that was a huge part of me agreeing to be on TV. I’m grateful that I had the opportunity to do so and represent my country and people the way that I did. That’s why this show is so important… it’s kind of like a continuation of what I went there to do — for everyone to experience the Black excellence of my brand.”

“L’art Du Patrimoine Haitien: When Food Meets Fashion” is happening at the perfect time, during Black History Month. It highlights the importance of Haitian culture within the African diaspora.

“Food played a major part in the household, even more than fashion,” Oscar said. “Fashion was just like you have to get dressed, that’s just how we are, but food was a thing. That’s how the event came about — we all kind of came in and put our ideas together. What I would like to show in this event to the guests is a little bit of what I like and the things that matter to me… food, fashion, music, the history of our people, the legacy, the integrity and the sleekness of it all. You come in, you have a great time, but you also get to see us with the food and the exhibition. We both bring something that I think is where the marriage is… a piece of tradition. Even though we try to make it modern for today, there’s always that piece of tradition that comes in and never gets substituted. That’s where the connection is.

“It’s nice to see that Haitian culture has influenced both of our artistry.” Senat added. “I want to make these fun Haitian dishes how I remember them, but I finally have the tools to modernize them and make them my own. As much as I want the fun carnival types of food, I also want to show culinary wise [that] we’re up there, and [that] you can make it fine dining and haute cuisine. I saw Prajje’s gowns, so I have to step the food up… I have to be my best. It’s actually pushing me to create new dishes, try new things, maybe a little molecular — it should be fun. My whole kitchen is excited, and for us to do this during Black History Month and tie in Haitian culture is great.”

Attendees can expect to taste Senat’s take on griot with a braised smoked pork belly and pikliz, among other traditional and modernized Haitian dishes. Oscar is featuring his work exhibition style and brings the ‘wow’ factor with couture evening dresses in a variety of colors, textures and silhouettes. The event will be hosted by Aunyea Lachelle of NBC 10 and will also include performances by Haitian performers Boho music, duo Riva and Monvelyno, specialty cocktails provided by Kiki Vodka and a Remy VSOP tasting.

To stay up to date with Prajje Oscar and Sylva Senat’s journeys, be sure to follow them respectively on Instagram @PrajjeOscar @SylvaSenat. “L’art Du Patrimoine Haitien: When Food Meets Fashion” will take place at The Pyramid Club, located at 1735 Market Street on the 52nd floor on February 25 from 7-10pm. Tickets are available at: https://lartdupatrimoinehaitienne.splashthat.com.