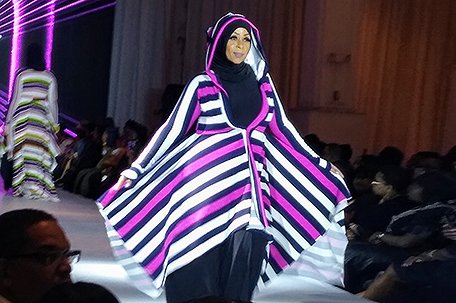 The partnership between Lov’n My Curves and Philadelphia Fashion Week was formed to ensure that there will be consistent representation of all shapes and sizes in their presentations during the event.

It was a packed house in the Fashion District last Saturday and much anticipation prior to the show. The Lov’n My Curves team said that they were expecting over 600 people this year.

Actress and humanitarian Sheryl Lee Ralph was a guest designer for the curvy girls fashion show. She graced the stage on Saturday and opened the Lov’n My Curves show with her new tee shirt line that inspires women to vote.

Known for her D.I.V.A collection, Ralph displayed bold statement pieces for all shapes and sizes.  Her apparel nearly sold out after she strutted down the runway at the top of the show.

“Women of color actually have the power to swing so many votes across this country.” Ralph said. “I created the T-shirts to inspire women to know that sometimes the help they need is right at the end of their own arm. VOTE sisters vote because you’ve got the power!”

As if the original “Dream Girl” wasn’t enough star power, Lov’n My Curves debuted  PZI Jeans by actress LisaRaye McCoy.  Despite the fact the that Players Club star couldn’t make it in person, she sent a recording thanking the City of Sisterly Affection for supporting her official launch of the new Curvy Jean Line.

Marquita Williams, a Philadelphia psychologist, produces Philadelphia’s Lov’n My Curves fashion show. She also helps her plus-size clients find self-love and build lasting relationships. She is hopeful that our society is nearing the end of fat shaming culture and practices.

Williams said the mission of Lov’n My Curves is to influence the presence of plus sized individuals into mainstream expectations of beauty and encourages all people, regardless of size, to embrace their full beauty with a dignity that shines from the inside out. Serving as the first and exclusive plus size partner for Philly Fashion Week since fall 2018, Lov’n My Curves has cemented a place in Philadelphia Fashion Week history.