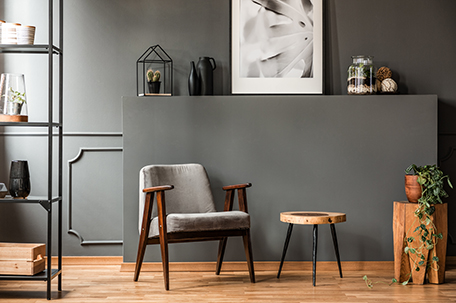 In recent years, brown anything in a living space was considered by some arbiters of decor as drab and outdated. But this fall the hue is back in favor, in part because of the unsettled, anxious state of the world.

“Brown traditionally makes people feel comfortable and safe, and those are feelings that many of us are looking to our homes to provide,” says interior designer Dawn Hamilton of Oakland Park, Florida.

It’s just one of the trends in decor this season, when the pandemic has made home an even more essential space for living, working, studying and more. Also on the watch list: flexible rooms, indoor and out.

Hamilton says today’s brown palette is being used in new ways, as a neutral in all kinds of materials, and as an accent color.

“Brown feels very earthy and rich. It’s warm and inviting, and has the same grounding properties as black, although it’s not quite as harsh,” she says.

Eilyn Jimenez of Sire Design in Miami is adding a mocha brown vanity to the guest bathroom of a “minimalist, French chateau-style” home she’s designing. “It adds a layer of depth with a vintage feel,” she says.

Don’t overdo brown, she warns, but blend it with modern materials like marble for beautiful juxtapositions.

“Bringing it in with light woods, leathers and other natural materials can help make a space feel timeless,” Jimenez says.

Melissa Morgan of M Interiors in San Antonio, Texas, thinks brown’s rebirth is “a reaction to years of very light, tonal interiors. Clients are looking for warmth and sanctuary in their homes more than ever.”

“In upholstery, we consider saddle leather to be a form of brown that’s like a trusty pair of blue jeans — it goes with everything,” says Chicago designer Brynn Olson.

Soft browns and caramels are also appearing in pillows, lamps and drapes. Caning is on trend too, says Amy Leferink of Interior Impressions in Woodbury, Minnesota.

As for furniture, Olson likes the effect of brown stains on walnut and white oak, and says a beautifully stained built-in is timeless. “Natural walnut will always feel fresh, and we love to pair it with bright white decor such as plaster vases, for a sophisticated pairing of textures,” she says.

That brown-and-white combo has been a favorite of decorating icons including Billy Baldwin, says New York City designer Glenn Gissler. Baldwin’s apartment in Manhattan featured a mix of glossy brown walls, white and chartreuse furniture, and brass accents. Inspired, Gissler recently painted a New York loft in a deep, rich brown, with columns and ceilings in crisp white. A long, tuxedo-style sofa in milk-chocolatey velvet anchors the space, along with tonal modern art.

Colors like purples and blues, of any intensity, also complement brown.

“Home has always been a refuge for recharging and relaxing; it’s going to become even more so,” says architect Jeffrey Dungan of Birmingham, Alabama.

Outdoor spaces, too, must be flexible.

“Can we design outdoor spaces that still have privacy, which become oases to enjoy fresh air and sunlight without being in public?” says Dungan.

Some designers say that because of quarantining and the variety of uses expected from rooms, they’re getting requests for more self-contained rooms.

He says some clients want a separate entrance area, where shoes, clothing and belongings can be sequestered from the main living areas.