Chevy blitzes into 2020 with revamped Silverado 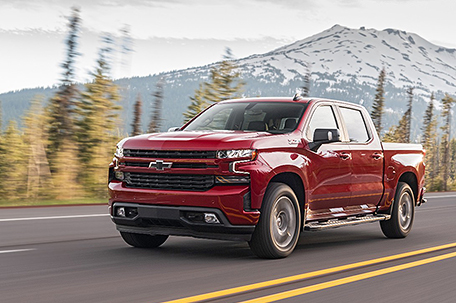 This past weekend I had the pleasure of experiencing the completely remodeled 2020 Chevy Silverado LT Z71. As a longtime fan of pickup trucks, Chevy has delivered, to say the least.

After over 100 years of manufacturing, Chevy decided the 2020 Silverado was due for several body and technological upgrades. The 2020 models are much bigger and stronger than in previous years, but somehow managed to be lighter and more fuel efficient without sacrificing performance.

My weekend started Saturday morning at the 120th installation of the Army-Navy Game presented by USAA. I arrived at Lincoln Financial Field before noon and saw veterans and their families, as well as some corporate sponsors tailgating, despite the inclement weather.

When I got to the Chevy tailgate, which was set up in the parking lot near the entry gates, I was given a walkthrough of the new features for the 2020 Silverado, including the advancements in technology, from the wireless charging to the added cameras and sensors for safety, and they even found ways to add storage compartments in the cabin, all of which I found incredible.

Many of the visiting fans were extremely excited for the game to commence, and I could not help but to think of my great-grandfather and grandfather — both Army veterans but since deceased — and served in World Wars I and II, respectively. Prior to the start of the game, I was invited to observe the pregame warmups on the field from Navy’s sideline, which was priceless.

This exact moment served as both my first Army-Navy Game, but also my first time ever actually on the turf at Lincoln Financial Field. What felt like 30 seconds was actually closer to 30 minutes, but the time flew as I was so enamored while humbled by what was before me.

While the score was rather lopsided, Army still played as if any moment could be their opportunity to come back, so the game did not feel as out of reach as the final score may dictate.

After the game, I drove the Silverado through the city to my dinner reservation. Through the rain, I never felt unsafe for one second. There were even times when I was sitting in traffic, but I didn’t mind because the seats were so comfortable that I just enjoyed sitting and driving in the truck. I was enamored by how much technology was available to me and how it helped me navigate the city streets with ease. The cameras and sensors even provide an overhead view, which I used to park parallel on downtown blocks. I enjoyed my time in the truck ,so much that I almost didn’t want to get out.

On Sunday, I woke up early enough that I was able to avoid any heavy traffic so I was finally able to test the true power of the Silverado, and I must say it did not disappoint. I was able to ease into the flow of traffic on I-76 in no time, which can be difficult to do from many of the short distance mergers onto the highway. There is even a projection of your current speed as it relates to the speed limit slightly above the hood, so you don’t have to look down to see how fast you’re driving. Chevy is extremely investing in enhancing the driver’s ability to keep their eyes on the road, which I thank them for.

Even my various passengers throughout the weekend were impressed by the Silverado, from the comfort of the front passenger seat, to the rear row; there were more than enough cup holders and charging capabilities for everyone who was with me. My only regret is that the weather did not permit for me to open the sunroof.

I highly recommend the 2020 Silverado for anyone in the market looking to buy a car. It is spacious, comfortable, fuel efficient, and loaded with technology to enhance your productivity and make your driving experience feel effortless.