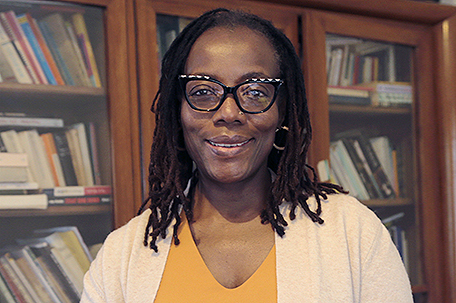 VIENNA — Accepting a prestigious German prize Sunday in honor of her work, Zimbabwean writer, and filmmaker Tsitsi Dangarembga called for a “new Enlightenment,” saying a fundamental shift is needed to overcome the structures of racial hierarchy that have led to violence in her home country and across the world.

“What we can look to is to change our thought patterns word by word, consciously and consistently over time and to persevere until results are seen in the way we do things and in the outcomes of our actions,” she said Sunday at St. Paul’s Church in Frankfurt.

In her remarks, Dangarembga spoke about Zimbabwe’s colonial past and the various forms of violence white colonialists inflicted on its Black inhabitants in the 19th and 20th centuries. That violence continued when Zimbabwe became independent in 1980, she added.

“These kinds of violence are structured into the global order that we live in and have their root in the structures of Western empire that began to be formed over half a millennium ago,” she said.

As a result, Dangarembga said the world is in need of new ways of thinking. She said bringing about real change will require not “miracle cures,” but hard, conscious work on behalf of those who have benefited from western power structures.

Dangarembga is known for her works including the bestselling novel, “Nervous Conditions” and its sequel, “This Mournable Body.” Announcing the prize earlier this year, the jury said she is “not just one of her country’s most important artists but also a widely audible voice of Africa in contemporary literature.”

Auma Obama, a sociologist and activist and half-sister of former U.S. President Barack Obama, introduced Dangarembga. She said the writer and filmmaker has fought “against all odds” and “with all possible means” for “the voiceless and for freedom of expression” in Zimbabwe.

“You presented a differentiated picture of the African continent worldwide,” Obama added.

In addition to the Peace Prize, Dangarembga has also been awarded the PEN Pinter Prize and the PEN International Award for Freedom of Expression this year.