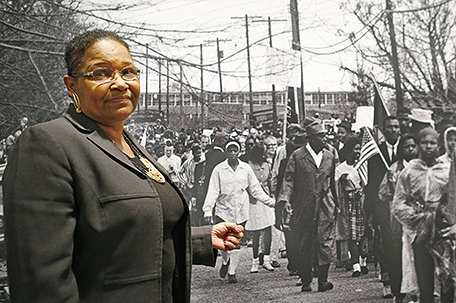 ABOVE PHOTO:  Lynda Blackmon Lowery pauses during an appearance at a pre-Martin Luther King Day appearance at the New York Historical Society in New York, Sunday, Jan. 18, 2015, where she detailed her experiences as the youngest participant in the 1965 march from Selma to Montgomery, Alabama that demanded voters rights for African-Americans, published in her memoir “Turning 15 on the Road to Freedom,” co-written with Elspeth Leacock and Susan Buckley. Lowery stands beside one of Stephen Somerstein’s photographs of the march, on display at the museum.  (AP Photo/Kathy Willens)

Those were the first words Lynda Blackmon Lowery says she heard from the mouth of Martin Luther King, Jr. “And those three words changed my life,” said Lowery, who at 15 was the youngest person to join King for the 1965 march from the Alabama cities of Selma to Montgomery, demanding voting rights for African-Americans.

On Sunday in New York, the now 64-year-old mother and grandmother showed the scar she still bears on the back of her head from a brutal beating at the hands of an Alabama state trooper during an earlier march when she was 14. It took 28 stitches to close the gash, and seven more for a cut above her right eye.

Lowery spoke at the New York Historical Society on the eve of Monday’s federal holiday marking King’s birthday. The audience represented all races and ages, including children who sidled up to her for photos, peppering her with questions like, faced with the brutality, “Why didn’t you fight back?”

She explained that they would have been killed if they did — unarmed, confronting “a sea of white men on foot and horseback,” armed with rifles, bayonets, billy clubs and fierce dogs, plus tear gas.

“It was terrifying,” she said.

A month earlier, activist Jimmie Lee Jackson was beaten and shot by a state trooper. His death inspired three marches from Selma to the state capital of Montgomery.

By the time she was 15, Lowery had been jailed nine times.

But there were moments of comic relief.

Flashing a warm smile, she recounted how when she and her young friends were released from the “sweatbox” — a windowless, sweltering hot cell — police asked them to sign their names for the record.

King is at the core of Lowery’s memoir, titled “Turning 15 on the Road to Freedom.” It was published in early January as Americans packed theaters to watch the film “Selma” about the early civil rights movement. The movie has been nominated for two Oscars, in the categories of best picture and best original song.

Lowery said she went to see it, but had to leave during the scene in which troopers and police attacked protesters at a march dubbed “Bloody Sunday” that preceded the famed, peaceful one to Montgomery on March 21, 1965. During the earlier march, authorities ordered several hundred marchers to stop at a bridge outside Selma. And when they quietly kept walking, the authorities viciously attacked.

After that day, she said she had to fight her fear to join the bigger march “because I was sure they would kill me.”

An exhibit highlighting this transformational moment in American history is up through July at the New-York Historical Society.

Lowery, who lives in Selma, said that even today, “you have the ability to change something each day of your life.”