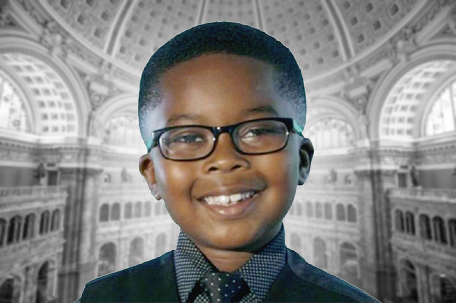 Nicholas Buamah’s work will be included in the Library of Congress’ collection of over 39 million books.

Georgia-bred author Nicholas Buamah hasn’t even reached the age of 10 yet, but he’s gone further in his literary career than most authors. According to Face2Face Africa, the 7-year-old’s book was accepted into the Library of Congress.

Buamah’s book—entitled “Kayla & Kyle, The Walking Dictionaries: Election Day”— was created in an effort to help youngsters build their vocabulary, the news outlet writes. The book — which is being sold by retailers like Amazon and Barnes & Noble — was so effective that it was selected to be added to the Library of Congress’ collection of over 39 million books. The story is centered on siblings vying to become their school’s next leader and who square off in a debate before their classmates.

“I developed the character of Kayla when Nicholas was younger to help teach him expanded vocabulary,” said Buamah’s mother Danielle in a statement, according to the news outlet.. “After being praised by his first-grade teacher for using the word ‘collaborate’ during his first week of school, I asked Nicholas what he thought about writing a book to help his friends expand their vocabularies.  He thought it was a great idea, as long as one of the main characters could be a male figure, and that’s when he created Kyle.”

Buamah wants his book included in school libraries throughout the country. The next installment of his “Walking Dictionary” series is slated to be released this summer. He wants to use the series as an avenue to help students develop literacy skills. Buamah has other goals that span outside of the literary world. He hopes to become a mechanical engineer one day.

There are many young Black authors on the rise.; 8-year old author Jamarion Rainey released a book entitled “ADHD and Me: The Key” to help other youngsters dealing with ADHD.