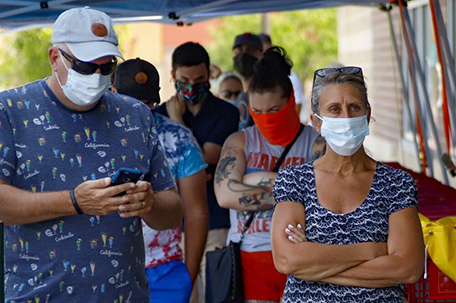 HARRISBURG, Pa.  — Gov. Tom Wolf’s more expansive mask order issued this week as the coronavirus shows new signs of life in Pennsylvania has been met with hostility from Republicans objecting to the Democrat’s use of power or even to wearing a mask itself.

It also comes as Texas’ Republican Gov. Greg Abbott has ordered masks to be worn in public across most of the state, after previously saying the government could not order people to wear masks.

Some Republicans insist they don’t dispute the idea of wearing a mask.

“What we’re disputing is by using his emergency powers, this governor is dictating it to people,” said Senate Majority Leader Jake Corman (R-Centre). “We live in a free society, people can make decisions for themselves.”

One of them, state Rep. David Rowe, (R-Union) said in a statement that it is “abhorrent that the Wolf administration has gone back and forth on this issue.”

“I feel it is up to your personal choice whether or not to abide by this mandate,” Rowe wrote.

Meanwhile, as a surge of infections hammers the South and West, even top Republicans in Congress are pushing back against the notion that masks are about politics, as Trump suggests, and telling Americans they can help save lives.

Still, some Republicans have delighted in defying Wolf. The county party in conservative Lebanon County has posted photos of its members this week gathering without masks.

“Excellent dinner meeting at Moose’s LZ, no social distancing, no masks,” it wrote on Facebook, mentioning a local restaurant. “We will continue to live our lives however the hell we please.”

Another lawmaker, Rep. Ryan Warner, (R-Fayette) invoked the July Fourth holiday, “liberty, freedom” and the sacrifice of so many soldiers so that citizens have a representative form of government.

“They died so that one man would not get to dictate laws and tell us how we have to live our lives,” Warner said in a Facebook video.

To be sure, most of the 16 or so governors issuing sweeping masking orders are Democrats.

But Democrats roundly say that Republicans’ criticism of Wolf is not about public health, policy or freedom: it’s about politics.

For months, Republicans have sought to blister Wolf over how he shut down businesses, the speed at which he allowed them to reopen, his use of his authority and more. In legislation and in lawsuits, they repeatedly sought to strip his authority, without success.

Some of the Republican efforts picked up the votes of some Democrats from more conservative districts. But Democrats fell in line with Wolf.

“One only need to look at what’s happening in southern states that ignored the advice of medical professionals,” Bradford said, referring to spiking coronavirus cases hammering some southern states in recent days.

Overall, about half of Americans say people in their community should always wear a mask when they are near others in public places, and roughly another quarter say people should most of the time, according to a Pew Research Center poll in early June.

Just about 1 in 10 say people should rarely or never wear masks in public around others, the poll found.

Mike Mikus, a Democratic campaign consultant from Pittsburgh, said Republicans are on the wrong side, medically and politically, and wouldn’t bristle over a mask policy under a Republican governor.

A deeper problem for them, Mikus said, is that polling shows Trump is losing Pennsylvania right now — a state he narrowly won in 2016 and that was critical to his election.

But the only voters who are angry over the mask policy are voters who already support Trump, Mikus said.

“And by taking this position, Republicans are just pushing the majority of voters away from them,” Mikus said.