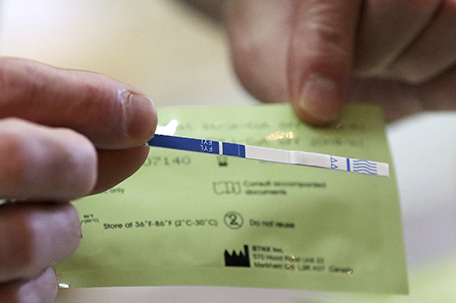 The 66 bills he approved include a package of tax credits, the Pennsylvania Economic Development for a Growing Economy program, that aims to promote Pennsylvania as a site for one of the hydrogen energy hubs being funded with federal subsidies.

The legislation drew opponents from both sides of the aisle, and in adding his signature to the bill, the Democratic governor said he supported it in part because it will create jobs.

“I recognize that in order for hydrogen to play a meaningful role in reducing emissions, we must ensure that the hydrogen used is truly ‘clean’ through stringent emissions standards,” he said. “We must also commit to strong and equitable community protections to prevent impacts to already overburdened communities and to guide benefits to communities that need them.”

A bill that legalized fentanyl testing strips for personal use, a measure meant to help curb fatal overdoses, also received Wolf’s signature. It updates a law that had classified the strips as drug paraphernalia and imposed significant penalties.

Wolf additionally signed legislation to allow companies and research institutions to apply for certificates to operate driverless vehicles on public streets, an effort to keep Pennsylvania’s autonomous vehicle industry competitive with other states. The state Department of Transportation must write regulations before it issues certificates.

“This technology brings the potential for significant advancements in vehicle safety and mobility, and offers economic development benefits across Pennsylvania,” Wolf said in a signing letter.

But he also pressed the GOP-controlled Legislature to make sure that it protects workers.

“Often new technology brings job replacement, and we must ensure Pennsylvania workers are protected and allowed the opportunity to participate in this industry as it continues to grow,” he said.

Wolf also signed legislation spurred by the Russian invasion of Ukraine. Under the bill, the state Treasury Department and the state’s three public pension funds must divest holdings in Russian and Belarussian companies sanctioned by the federal government. Officials at those agencies had said in the earliest days of the invasion that they were moving to sell any securities connected to those countries.

Another bill that allows automatic knives — known colloquially as switchblades — received the governor’s signature as well. Previously, the knives were classified as offensive weapons, which prohibited people from using them. Most states allow switchblades.

Wolf wielded his veto pen once, striking down a bill that would have added passenger cars to the definition of farm vehicles. In his veto message, Wolf said he had safety concerns because the cars would be exempt from registration, insurance, and inspections.

With the singular veto Thursday, Wolf has vetoed 65 bills since 2015, the most coming in 2020, more than any other governor since 1979. He has surpassed Democratic Gov. Robert P. Casey, who compiled 50 vetoes. A spokeswoman said that he has signed 95% of the bills that came to his desk.

The veto and signatures cap the near end of Wolf’s second term and the two-year session. Lawmakers will return later this month, but with the session’s conclusion, any bill that doesn’t pass before new legislators are sworn in in January will die or need to be reintroduced.