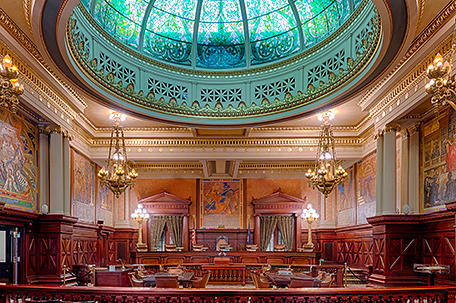 By Mark Scolforo and Michael Rubinkam

HARRISBURG, Pa. — Democratic Gov. Tom Wolf asked the Pennsylvania Supreme Court last Friday to intervene in his dispute with legislative Republicans who are trying to end pandemic restrictions he imposed in March to slow the spread of the new coronavirus.

Republican majorities in the House and Senate, with a few Democrats in support, voted last week to end the state’s emergency disaster declaration that Wolf has used to shut down “non-life-sustaining” businesses, ban large gatherings and order people to stay at home.

Wolf asked the state’s high court to uphold the shutdown. He said that his gradual reopening plan is working, pointing to a downward trend in the number of new virus infections in Pennsylvania even as cases rise in nearly half the states.

“Pennsylvania’s measured, phased process to reopen is successful because of its cautious approach that includes factors relying on science, the advice of health experts and that asks everyone to do something as simple as wearing a mask when inside or around others outside the home,” Wolf said in a news release. “We will continue to move forward cautiously.”

Wolf has been easing restrictions in vast swaths of the state, including last Friday when he announced that another eight counties would be moving to the least restrictive “green” phase of his reopening plan. But gyms, barber shops, theaters and similar businesses in the state’s highly populated southeast corner remain closed, and many types of businesses statewide must abide by occupancy limits.

Contending the emergency has passed and continued pandemic restrictions are unwarranted in the face of historic unemployment, Senate Republicans went to court last week to compel Wolf to abide by a resolution they said would end the shutdown.

Their suit asked a state appellate court to force Wolf to issue an executive order ending the disaster emergency. The state attorney general’s office, replying last Friday on behalf of Wolf, accused Republicans of trying to circumvent the state constitution and “upend the Commonwealth’s carefully planned reopening process.” Wolf’s lawyers asked the Supreme Court to declare the Legislature’s resolution to be legally invalid.

“This conflict between the Legislative and Executive branches is causing great confusion among the public as to whether the disaster continues and whether certain executive orders issued under the Emergency Code remain in place,” Wolf’s lawyers wrote. “This confusion is life-threatening, as individuals look to our government for guidance on how to protect themselves and their families from this deadly pandemic.”

Under the state constitution, so-called “concurrent resolutions” like the one passed last Tuesday are supposed to be presented to the governor for approval or disapproval. Republicans in the Legislature are refusing to present the resolution to Wolf, saying they approved it using their constitutional power to suspend laws. They also point to the state’s emergency services law, which says the General Assembly “may terminate a state of disaster emergency at any time.”

“We maintain that the power for the governor to declare an emergency is clearly defined … as are the provisions for the checks and balance, which is that the Legislature can end the declaration,” Senate GOP spokesperson Jenn Kocher said in an email.

Wolf loosened restrictions on eight more counties, announcing Friday that Dauphin, Franklin, Huntingdon, Luzerne, Monroe, Perry, Pike and Schuylkill counties are moving from yellow to green under the state’s phased reopening system. The new designation, which will take effect in one week, allows gyms, barbers and theaters to reopen at reduced capacity. Bars and restaurants may allow indoor dining, also at reduced capacity. Gatherings of up to 250 people are permitted in green zones.

By next Friday, 54 of 67 counties will have been designated green. Remaining in the more restrictive yellow phase are Philadelphia and southeastern counties, where the coronavirus has had the worst impact; parts of the Poconos region, Lehigh Valley and northeastern Pennsylvania; and Erie, Lebanon and Lancaster counties. A dozen more counties moved to green on Friday, after Wolf announced their status change a week ago. They are Adams, Beaver, Carbon, Columbia, Cumberland, Juniata, Mifflin, Northumberland, Union, Wayne, Wyoming and York.