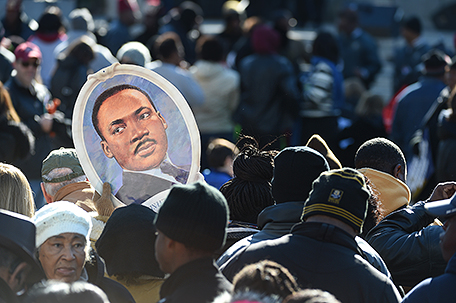 COLUMBIA, S.C. — For the first time in 17 years, civil rights leaders gathered Monday at the South Carolina Statehouse to pay homage to the Rev. Martin Luther King Jr. without the Confederate flag casting a long shadow over them.

The banner was taken down over the summer after police said a young white man who had posed for photos with a rebel flag shot nine black church members to death during a Bible study in Charleston. After the massacre at the Emanuel African Methodist Episcopal Church, Republican Gov. Nikki Haley reversed course and made it a priority for lawmakers to pass legislation to remove the flag.

“Isn’t this a great day? It’s so nice to be standing here and not looking at that flag,” said Ezell Pittman, who attended most of the King Day anti-flag rallies since they started in 2000. “I always had faith it would come down. I hate it took what it did, but was real happy to see it go.”

Across the country, the 30th anniversary of the holiday to honor the civil rights leader assassinated in 1968 was remembered in different ways. In Michigan, people delivered bottled water to residents of Flint amid the city’s drinking water crisis. In Atlanta, an overflow crowd listened as to the nation’s housing secretary talk about the 50th anniversary of King’s visit to Chicago to launch a campaign for fair housing. Rallies against police brutality in Minnesota and California briefly shut down traffic on two bridges.

South Carolina NAACP President Lonnie Randolph said the flag’s removal was tangible evidence the state cares about civil rights when pushed hard enough. But he warned there would be other fights ahead.

“I promise you, the people that gather in this building — your building — will do something this year to cause us to return to ensure freedom, justice and equality is made possible for all people,” Randolph said, motioning toward the capitol behind him.

Randolph promised to keep coming to the Statehouse until King’s dream comes to its full meaning in a state with wide gaps in education achievement between school districts in rich, white communities and poorer, black ones, and where the governor and Republican-dominated Legislature have refused to take federal money to expand Medicaid.

About 1,000 people gathered at the Statehouse on a clear, cold day, drawn in part by appearances by all three main Democratic presidential candidates — Hillary Clinton, Bernie Sanders and Martin O’Malley.

Sanders reminded the crowd King was a dynamic leader who wanted to help the poor. O’Malley said King would be ashamed his county has made it harder to vote and easier to buy a gun.

Only Clinton dealt directly with the flag. She credited Haley and the Republicans with working with the NAACP after the church shooting and choosing King’s legacy over hatred.

“We couldn’t celebrate him and the Confederacy. We had to choose,” Clinton said. “And South Carolina made the right choice.”

They also stuffed bags with books for needy children along with young people who participate in a White House mentoring program and volunteers from the AmeriCorps national service program.

Elsewhere, an overflow crowd showed up at Ebenezer Baptist Church in Atlanta to celebrate its former pastor’s legacy at an annual commemorative service. It capped more than a week of events under the theme: “Remember! Celebrate! Act! King’s Legacy of Freedom for Our World.”

While people have been distracted by TV reality shows and music “that tears down instead of uplifts,” many injustices have occurred and “we’re about to create right here in this civilized society the wild, wild west with guns,” said King’s daughter, the Rev. Bernice King.

“Y’all, we can’t keep being distracted, because if you’re not careful, we’re about to allow a reality show host to bully himself into becoming president of the United States of America,” she said.

U.S. Secretary of Housing and Urban Development Secretary Julian Castro told the church audience that King moved into a Chicago apartment on the city’s west side 50 years ago and described seeing “a daily battle against depression and hopelessness” as babies were attacked by rats and children wore clothes too thin to protect against the Midwest winter

“You see, Dr. King knew that housing was more than about just bricks and mortar,” Castro said.

In Minneapolis, activists braved frigid temperatures as they marched onto a Mississippi River bridge that connects Minneapolis and St. Paul to protest the deaths of two black men shot by police last year in the Twin Cities. A St. Paul officer was placed on leave while the Police Department investigates allegations that he made a post on Facebook urging drivers to run over protesters.

In California, protesters from a Black Lives Matter offshoot group shut down one side of the San Francisco-Oakland Bay Bridge when they stopped vehicles in the westbound lanes and chained themselves and the cars together to form a line across the bridge. The California Highway Patrol says 25 people were arrested.