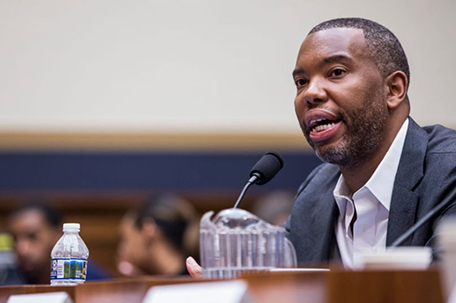 Nearly 90 years ago, Kelly Miller,  a Black sociologist and mathematician, said, “The Negro is up against the white man’s standard, without the white man’s opportunity.”  As the first Black man to enroll as a graduate student at Johns Hopkins University in 1908, Miller also authored a book entitled, “Race Adjustment”, published in 1908.

Ironically, despite the passage of time, Miller’s words express the same sentiment held today by many Black Americans. As a people and across succeeding generations, we have held fast to our hopes for a better life. Yet it is painfully true that many opportunities enjoyed by other Americans have been elusive for people of color.

“Enslavement reigned for 250 years on these shores,” noted Coates. “When it ended, this country could have extended its hallowed principles — life, liberty, and the pursuit of happiness — to all, regardless of color. But America had other principles in mind. And so for a century after the Civil War, Black people were subjected to a relentless campaign of terror, a campaign that extended well into the lifetime of Majority Leader McConnell.”

While economists, public policy think tanks and other entities may sing a chorus of how well the American economy is performing and expanding, people of color – especially Blacks and Browns – have yet to see or feel economic vibrancy in our own lives – particularly when it comes to housing and homeownership.

On June 25, Harvard University’s Joint Center for Housing Studies (JCHS) released its annual report, “The State of the Nation’s Housing.” One of the housing industry’s most broadly anticipated and cited reports, it once again chronicles recent trends and issues.

“The limited supply of smaller, more affordable homes in the face of rising demand suggests that the rising land costs and the difficult development environment make it unprofitable to build for the middle market,” said Chris Herbert, JCHS’s managing director.

Among this year’s key findings:

In additiona to this rise in home prices, 2019 also marks the seventh straight year that median household incomes have failed to keep pace in 85 of the nation’s largest 100 markets.

Nearly $52,000 would be required to make a 20% down payment on a median priced home. Even if buyers opted for an FHA 3.5 percent down payment mortgage, more than $9,000 would be needed to pay it, closing costs, and related fees.

For families who already own their own homes, these findings signal that their investments are appreciating, growing in equity and wealth.

But for those trying to make that important transition from renting to owning, it’s a very different outlook. As rental prices continue to soar and moderately priced apartments disappear from the marketplace, both prospective homeowners and current renters face a shrinking supply of affordable housing.

When homeownership is possible, housing costs can be better contained with fixed-interest rate mortgages, tax credits, and eventual equity. Even so, the Harvard report finds that only 36 percent of all consumers could afford to buy their own home in 2018. With higher priced homes in 2019, the affordability challenge worsens.

“It is equally noteworthy that once again this key report shares how consumers of color continue to face challenges in becoming homeowners, noted Nikitra Bailey, an EVP with the Center for Responsible Lending. “According to the report, only 43 percent of Blacks and 47% of Latinx own their own home, while White homeownership remains at 73 percent.

“This 30% disparity deserves further examination and proportional remedies,” continued Bailey. “Greater access to safe and affordable credit, better fair housing enforcement, preservation of anti-discrimination laws – including disparate impact – can play a role in eliminating homeownership gaps. Further, as the future of Fannie Mae and Freddie Mac are publicly debated, a renewed commitment to serve all creditworthy borrowers must be embraced.”

Calvin Schermerhorn, a professor of history in Arizona State University’s School of Historical, Philosophical and Religious Studies and author of The Business of Slavery and the Rise of American Capitalism, 1815-1860, holds similar views to those expressed by Bailey. In a recent Washington Post op ed column, Schermerhorn addressed the historic disparities that Black America continues to suffer.

“One-fifth of African American families have a net worth of $0 or below; 75 percent have less than $10,000 for retirement,” wrote Schermerhorn. “The enduring barriers to Black economic equality are structural rather than individual…. “Escalators into the middle class have slowed and stalled, and the rung of the economic ladder one starts on is most likely where one will end up.”

On the same day as the Harvard report’s release, President Donald Trump signed an executive order that establishes a new advisory body that will be led by HUD Secretary Ben Carson. A total of eight federal agencies will work with state and local government officials to remove “burdensome governmental regulations” affecting affordable housing.

If Secretary Carson means that local zoning rules favor single family homes over multi-family developments is a fundamental public policy flaw, he may be on to something. However, this focus misses the crux of the affordable housing crisis: wages are not rising in line with increasing housing costs. And now, after the housing industry continues to cater to more affluent consumers, while many older adults choose to age in place, the market has very little to offer those who want their own American Dream, including some who are anxiously awaiting the chance to form their own households.

Builders have historically, not just of late, complained about the time it takes to secure permits or the series of inspections that must be approved during construction and before properties can be listed for sale.  What is missing from this new initiative is a solution to the financial challenges that average people face.

It was scant regulation and regulatory voids that enabled risky mortgage products with questionable terms that took our national economy to the brink of financial collapse with worldwide effects. Taxpayer dollars rescued financiers while many unnecessary foreclosures stripped away home equity and wealth from working families

Time will tell whether new advisors and proposals remember the lessons from the Great Recession.

Charlene Crowell is the communications deputy director of the Center for Responsible Lending. She can be reached at [email protected]