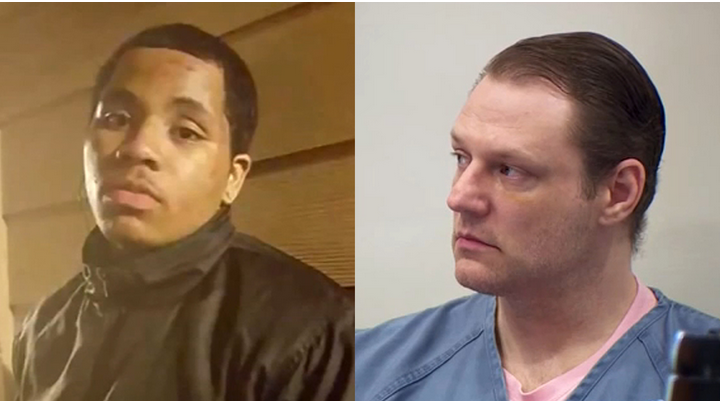 PORTLAND, Ore. — A white supremacist who ran down and killed a young black man in Oregon two years ago was sentenced Tuesday to life in prison without the possibility of parole for 28 years.

Russell Courtier’s sentencing came after jurors in March found Courtier, 40, guilty of murder, hit-and-run driving and the hate crime of second-degree intimidation in the death of 19-year-old Larnell Bruce, The Oregonian/OregonLive reported.

Courtier and Colleen Hunt were in a Jeep driven by Courtier in August 2016 when he was encouraged by Hunt to drive into Bruce after the two fought outside a convenience store in the Portland suburb of Gresham, authorities have said.

Prosecutors argued Courtier was motivated by his white supremacist beliefs – saying he was a member of the European Kindred white supremacist prison gang and was wearing the gang’s logo on his baseball cap and had its tattoo on his leg when he encountered Bruce.

Surveillance video showed Bruce standing outside the store when Courtier drove up and parked. A fight erupted, but it was not clear how it started, said prosecutor David Hannon.

The video then captured Bruce running down a street and a sidewalk in an attempt to get away from Courtier, who chased Bruce in the Jeep and hit him. Bruce died several days later.

Bruce’s mother, Christina Miles, told Courtier in court that “you allowed the devil to misguide you and take the life of such a beautiful young spirit.”

Larnell Bruce Sr., the victim’s father, said he hopes Courtier spends his time in prison thinking about whether he wants his own son, who is 8, to grow up among white supremacists.

“That ideology that you have is not good for anybody,” Bruce said.

Courtier teared up in court, but did not speak during the sentencing because his lawyers said they advised him against doing so. He is already serving a four-year sentence for his role in a 2015 bar attack.

Hunt pleaded guilty to manslaughter, agreed to accept a 10-year sentence and was scheduled to be sentenced Tuesday afternoon.