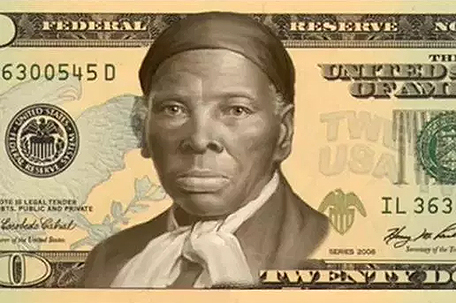 ABOVE PHOTO: Mock up of the Harriet Tubman $20 bill

I know it sounds like such a long time ago that Barack Obama was our dearly beloved president, but when he was, we rejoiced in the fact that Harriet Tubman was finally going to be properly recognized at the national level for all the work she did under dangerous circumstances to perfect our union. Those who knew of her great work were overjoyed that her likeness was going to grace the $20 bill. We were so sure that planning for that to happen was already underway.

Hearing nothing about that effort since President Obama left office, we are concerned. Is anyone planning to make it happen? I’ve been hearing things are at a standstill. Maybe you should ask your elected representatives to find out the status of the project. The person who can answer that is Treasury Secretary Steven Mnuchin, but good luck in reaching his office! That’s why I’m suggesting asking your Member of Congress to raise the question for us.

She risked her life to save others even when some were too afraid to help themselves. She had the kind of courage we so badly need today. She was a selfless leader and liberator. She cared so much for our people that even when she went through dangerous terrain to free herself, she continued to return to bring others out of slavery.

Harriet was the kind of strategist we need today, and Lord knows we need one who can get us through the current administration that seems to hate everybody and all that is good. Many of us who call ourselves leaders are weary from having to continue to fight the same battles for justice and equality.

Maulana Karenga described Harriet in a way that puts our people to shame who are always too tired, too busy and too uncaring to do liberation work. He described her as an “all-seasons soldier, abolitionist, freedom fighter, strategist, teacher, nurse, advocate of human, civil and women’s rights…. At the heart, center and core of the life, work and struggle of Harriet Tubman is her focus on freedom.

It is from the outset an inclusive and indivisible freedom: the collective practice of self-determination in and for community. Thus, its’s not enough for her to free herself, for that to her was only an escape from the immediate bondage of the devilish enslaver and the radically evil system they built and maintained. And it wasn’t enough to have crossed a line that in most minds meant leaving the land of bondage and entering the land of ‘freedom’ and forgetting those left behind.”

We must not allow this administration to prevent Harriet from receiving the honor she deserves. Rep. Elijah Cummings, Rep. John Katko and Sen. Jeanne Shaheen offered a bit of hope when they raised concern that the administration is stalling this historic effort and have urged them to follow through and expedite the redesign of the $20 bill. Meanwhile, they’ve introduced a bill to pass the Harriet Tubman Tribute Act of 2019.

That’s fine, but we must take action to put her likeness on the $20 bill to reflect the contributions of all women, especially women of color, in perfecting our union. Call your Member of Congress today at (202) -225-3121 to ask for the status of the $20 bill that is to carry Harriet Tubman’s likeness, replacing Andrew Jackson.

E. Faye Williams is national president of the National Congress of Black Women and host of “Wake Up and Stay Woke” on WPFW-FM 89.3.