What gets lost in the Rachel Dolezal distraction 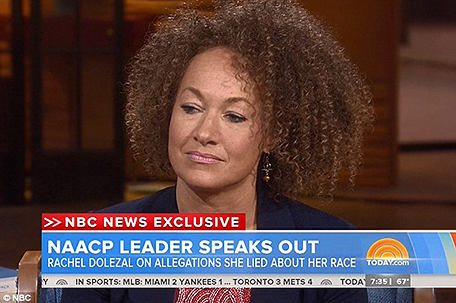 ABOVE PHOTO: Screen grab from NBC

Her name is Dajerria Becton.

Some of you are looking at this and wondering what I’m talking about. That’s because less than a week after Dajerria Becton was physically assaulted by Texas police officer, Eric Casebolt, the story of former Spokane NAACP President Rachel Dolezal leaked.

By now, of course, you know who Dolezal is. She’s been getting lots of national news coverage since her parents went on NBC’s “Today” Show and broke the news that she was actually a white woman despite Dolezal’s claims of blackness. Her biological and adopted brothers have also gone on camera telling a similar story to their parents.

Meanwhile, Dolezal resigned from the NAACP on Monday, and appeared on the “Today” Show herself, with her two black, male children, to tell Matt Lauer and the rest of the nation that she still “identifies” as black.

As I halfheartedly listened to the interview, I realized that the entire nation is surprised that a white woman could, or would even want to, pretend to be black. I mean, how bad could it be to be black if this nice, white woman wanted to do it, right?

I guess that Dolezal pretending to be a black woman isn’t really a crime…unless you count the false claims to police that she was a victim of a hate crime and her telling the Spokane Police Commission that she was black when she applied to be a member. And its also not clear if she may have received funding (such as scholarships, etc.) that were set-aside for African Americans.

The woman clearly gets off on the lie, adding more and more absurdities to her story as the years went one. She lived in a hut. She hunted for food. She even managed to find a fake black dad.

Dolezal may have been genuinely in support of the agenda of the NAACP and fighting for the rights of African Americans. She may have worked hard to help end crime, violence and injustice in Spokane. She may have really loved black culture and admired black people. And even though NAACP bylaws do not state that one must be black (or any race for that matter) to serve as a member of the executive board, her compulsive lying is a bit of a turn off.

But Dolezal’s not really the issue.

The media’s attention on her antics and the distraction it’s created are.

Because the media has been covering Dolezal and her “Imitation of Life” routine, a much more important story, the assault of Dajerria Becton, has gone ignored. Dajerria, a bikini clad teen was thrown to the grown by former Officer Eric Casebolt in McKinney, Texas after he was called to the scene of a pool party gone bad due to an altercation between white swimmers and a group of black teens.

When Trayvon Martin was shot, George Zimmerman, the man who shot him, used feeling threatened as a defense. When Mike Brown was shot, former Ferguson, Missouri police Officer Darren Wilson said Brown had attacked him. Even the officers who killed Eric Garner in New York were able to walk away due to a claim that Garner was resisting arrest.

But in Dajerria Becton’s case, none of those things were there. There’s no way that Officer Casebolt should have felt threatened by a girl that weighed no more than 120lbs and was wearing a bikini. How could he have thought that grabbing her by the hair, slamming her to the ground and then pinning her there was the appropriate course of action?

And how much differently would the national response look like had the 14-year-old girl in a swimsuit with the cop pinning her down were white?

The message being conveyed by the saturation coverage of Rachel Dolezal and the lack of coverage of Dajerria Becton is that being black can’t be all bad if this white woman has been doing it for years. But the reality is, the actions of the police and other governmental entities to actual black people show that our presence is seen as threatening…and must either lead to our degradation or death.

Clearly everyone around Rachel Dolezal had finally had enough of her lies because they all conspired to oust her. But why have we chosen to share, tweet, and consume this story to the degree that it has overshadowed the blatant assault of one of our children by a police officer? Not to mention the lack of feminist voices around this issue. Correct me if I’m wrong but this is 2015 right? Are we really considering sending the first female to the White House, while somewhere in Texas a little girl can be flung to the ground? Does no one else have a problem with this?

While we may all like to believe that Dolezal is somewhere crying because everyone now knows she’s really white, I get the funny feeling she’s actually enjoying all this national attention.

The unfortunate truth is that Dajerria Becton probably didn’t enjoy her 15 minutes in the spotlight as much.