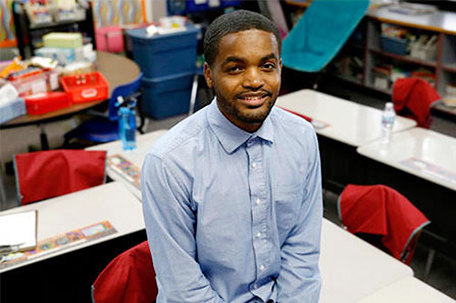 SKOKIE, Ill.  — A new teacher who made a music video to welcome his students has become a bit of a star with his fourth-graders.

Dwayne Reed‘s video was posted on YouTube last week and has already been viewed more than a half-million times and earned him an appearance on ABC’s “Good Morning America.”

The 25-year-old Reed just began teaching at Stenson Elementary School in the Chicago suburb of Skokie.

In his video, Reed wears a lab coat and sings, “Welcome to the fourth grade. So happy to meet you. Can’t wait till I see you.”

Reed says he wants his students to know they are important, loved and that they can be leaders.

He says students love the video and even introduced themselves to him using his lyrics.