This week in Trump’s ‘alternative facts’ 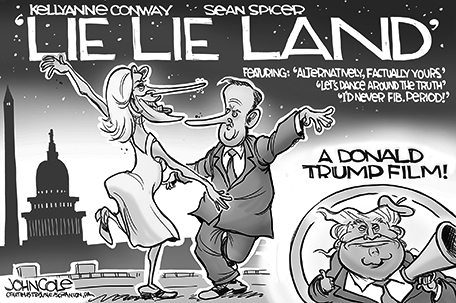 Less than 24 hours after White House press secretary Sean Spicer had spouted numerous falsehoods about inauguration crowd size and more,  Counselor to the President Kellyanne Conway went on NBC’s “Meet the Press” to defend him. In the process, the counselor to President Donald Trump coined a phrase that’s now deigned to follow Trump throughout his presidency — “alternative facts.”

The Trump administration’s push-back on easily verifiable facts is unprecedented and shows that the Trump we saw on the campaign trail and in debates — who was freewheeling with facts and assertions and often peddled wildly exaggerated claims — had not changed once he took the oath of office. And it’s only week one.

npr rounded up some of the White House’s assertions here that are exaggerated or just flat out false.

President Trump told members of Congress during a Monday evening meeting that there were 3 to 5 million illegal votes cast in last November’s election.

THE FACTS: This is not true, no matter how many times Trump and his surrogates repeat it. The administration has never provided proof of this claim, and the studies they have cited do not, in fact, support the claim. Even the authors of those studies have said that the studies are being misused by Trump.

Analyses do show that a tiny bit of voter fraud does happen, but there is no evidence of voter fraud on this scale; that would be a scandal of “astronomical proportions,” as NPR’s Mara Liasson said to White House Press Secretary Sean Spicer this week.

Trump also pointed to a frequently-cited Pew study as evidence, which Muir pushed back on, saying correctly it shown “no evidence of voter fraud.” Trump said the author was “groveling again. You know, I always talk about the reporters that grovel when they wanna write something that you wanna hear but not necessarily millions of people wanna hear or have to hear.

THE FACTS: That Pew 2012 report does show that 2.8 million people are registered to vote in more than one state and that 24 million registration records “are estimated to be inaccurate or no longer valid.” But that is not evidence of fraud unless people vote in both states. And the author is not “groveling” when he simply pushes back when his report is taken wildly out of context and twisted into falsehoods. It is not a felony to be registered in two states — in fact, several Trump family members and advisers are registered in two states. 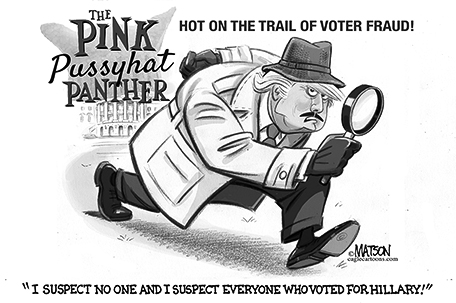 “No, no, you have to understand, I had a tremendous victory, one of the great victories ever. In terms of counties, I think the most ever or just about the most ever. When you look at a map it’s all red.” Trump to ABC, Jan. 25

THE FACTS: Trump did have an overwhelming victory, county-wise. But Trump still lost the popular vote to Hillary Clinton by nearly 3 million votes. And his electoral college victory ranked 46th out of 58 presidential elections.

“He won overwhelmingly with 306 electoral votes, the most since any Republican since Reagan. He’s very comfortable with the depth and breadth of the support that he got from the American people and the 33 states that voted for him, the nine of 13 battleground states, the 2,600 counties. He’s very, very pleased with that.” Spicer at Jan. 24 briefing

THE FACTS: While Trump should have gotten 306 electoral votes according to the state by state results, he in fact will only end up with 304 because two electors in Texas defected when Electoral College voters cast their ballots; Clinton had several defectors, too. And Trump’s victory wasn’t the largest GOP win since Reagan — George H.W. Bush won 426 electoral votes in 1988.

Trump on reaction to his CIA speech

“I had a standing ovation like you wouldn’t believe….They actually — they were standing from the beginning. They didn’t even sit down. It was one standing ovation, the whole thing.” Trump in interview with Fox News’ Sean Hannity, Jan. 26

THE FACTS: Trump never told the CIA officers to sit at the beginning of his speech, and it’s standard protocol without a directive from the president, they wouldn’t have sat down, as Huffington Post’s S.V. Date explains.

And there were about 400 staffers at the speech. There were 71,088 fans who attended the Super Bowl last year where Manning led the Denver Broncos to the championship. So, no — it was not “equal” to the reception Manning got by any measure or standard, and it’s not clear who “they” are that Trump claims made this false claim.

Trump on his inauguration crowd size

“I had the largest audience. I did. I had the largest audience. If you add the television, you add all the sources, the largest audience in the history of inaugurations. I did. They try and demean it so much. And when you look at pictures — I would love to show you a picture, when I was in that speech, I looked at, it was a sea of people and they want to demean it. I don’t even know when that picture was taken by the way, to be honest with you. But it wasn’t taken from where I was. They take a picture from the back, from the Washington Monument, a backward picture. They are so demeaning and they are so dishonest.” Trump interview with Hannity

THE FACTS: Side-by-side photos taken during the same time frame of Trump’s inauguration and President Obama’s inauguration clearly show a larger crowd eight years ago along with empty areas along the mall, as we debunked earlier in Spicer’s weekend tirade. According to Nielsen, 30.6 million people watched Trump’s inauguration — which is certainly notable — but 38 million people tuned in for President Obama’s first inauguration in 2009. It’s tougher to determine how many people streamed the inauguration, which has grown as a platform in eight years. But CNN reported they actually had a larger streaming audience for Obama’s inauguration than Trump’s. And as for the “backward” picture — the Obama photo was taken from the exact same angle. 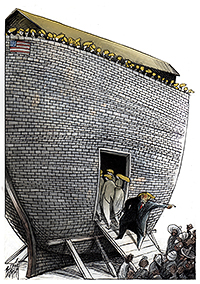 “Do you know if you were a Christian in Syria it was impossible, at least very tough to get into the United States? If you were a Muslim you could come in, but if you were a Christian, it was almost impossible and the reason that was so unfair, everybody was persecuted in all fairness, but they were chopping off the heads of everybody but more so the Christians. And I thought it was very, very unfair.” Trump’s interview with the Christian Broadcasting Network, Jan. 27

THE FACTS: This Pew Research study shows that roughly the same number of Muslim refugees and Christian refugees were admitted to the U.S. in 2016. And while Christian refugees from Syria were admitted in far less numbers than Muslim refugees from the same country, they make up only about 5 percent of the population in Syria. As the Washington Post fact-checker finds, when looking at Iraqi refugees, Christians made up about 15 percent of those admitted to the U.S. even though they make up less than 1 percent of the Iraqi population. As Glenn Kessler of the Post writes, “The basic fact is no one understands why there is such a disparity. The president could highlight that situation without suggesting that something nefarious is going on.”

“Chicago is like a war zone….when President Obama was there two weeks ago making a speech, very nice speech. Two people were shot and killed during his speech. You can’t have that.” Trump in ABC interview

THE FACTS: As the Chicago Tribune reports, police records show that, “Not only did no homicides take place in Chicago during Obama’s address of about an hour Jan. 10, but the official Police Department records and the Tribune’s crime database show that no shootings at all occurred over that time frame.”

“Here in Philadelphia, the murder rate has been steady — I mean just terribly increasing.” Trump speaking to the GOP House retreat in Philadelphia on Jan. 26

THE FACTS: There were just 277 homicides in Philadelphia in 2016, down from 280 the year before, the Washington Post reports. And that is steadily down from 10 years ago when there were 391 murders in 2007. While there have been 27 murders so far in 2017 — 10 more than this time last year, as the Post notes, “that is too small a sample size to say violence is ‘terribly increasing.’”

On American-made products and American jobs

“And the President’s top priority is to retain and attract American jobs, which have already seen happening through his actions on Carrier, Sprint, General Motors and so many more.” Spicer on Jan. 23 press briefing

THE FACTS: When Trump touted back in December that he had saved 1,000 Carrier jobs from going to Mexico — a frequent campaign stump speech promise when he was in the Midwest — it was hailed as evidence that his aggressive approach to keeping manufacturing jobs would work. In fact, the Carrier deal saved less than half of the jobs there, though the broader deal did also save jobs at the United Technologies’ factory elsewhere in Indiana. However, some of those Carrier jobs will eventually be lost to automation. Ultimately, about 1,000 jobs will still move to Mexico. The deal also included $7 million in tax breaks for the company, which even vocal Trump supporter Sarah Palin called “crony capitalism.”

After Trump called out GM for making their Chevy Cruze in Mexico, the company pointed out that the main model sold in the U.S. is manufactured in Ohio. The company later announced they would move a production for parts from Mexico to Michigan, adding 450 jobs, and also moving more IT jobs back to the United States. Trump claimed credit, but GM leaders said the move had been planned for a long time.

“…buy America and hire America is at the core of the president’s plan to create an economy that works for everyone…” Spicer on Jan. 23 press briefing

THE FACTS: Many of Trump’s own signature pieces sold at his clubs and clothing from his daughter Ivanka’s clothing line are made overseas.

On the federal workforce

THE FACTS: There were nearly 2.8 million federal workers when Obama took office. As of December 2016, there were just a little more than 2.8 million. That’s not exactly a dramatic increase, as this chart shows. The only dramatic increase happened in April 2010, when the government hired hundreds of thousands of temporary census workers, which happens every 10 years.