We Are A Part of “Suspicion Nation” 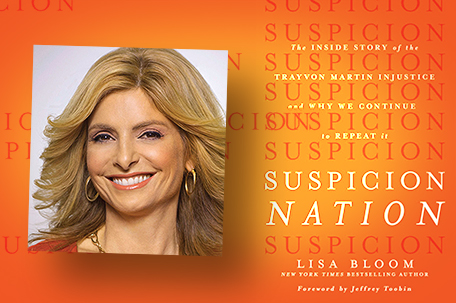 ABOVE PHOTO: Lisa Bloom and her new book.

In her new book “Suspicion Nation: The Inside Story of the Trayvon Martin Injustice and Why We Continue To Repeat It”, Lisa Bloom argues that the same biases that led George Zimmerman to kill Trayvon Martin were present in the trial that exonerated him.

One of the first questions that perspective jurors are asked before they’re seated on a jury is “Can you put aside your biases and look at this case strictly on the merits of the law?”

I’ve always found that an interesting question because in the end, juries are made up of people in the area you’re from, which is where we get the phrase “a jury of your peers.”

When George Zimmerman went on trial for the death of Trayvon Martin in Sanford, Florida, the impaneled jury got the same directions: leave your biases at the door and just look at the law.

But in her new book “Suspicion Nation: The Inside Story of the Trayvon Martin Injustice and Why We Continue To Repeat It”, NBC Legal Analyst and author Lisa Bloom says that not only did the jury bring its biases into the jury room, but that Florida Prosecutor Angela Coney made it easy with the things they forgot to bring up.

Bloom, the daughter of feminist legal firebrand Gloria Allred, was at the Zimmerman trial from beginning to end and talks about the things that the prosecutors missed when presenting their case and how that gave the jury the room they needed to make the decision they did.

For example, when Zimmerman first talked with police, he said he shot Trayvon  because he claimed the young man was reaching for his gun. Bloom asserts that this couldn’t have been the case because Zimmerman’s gun was hidden inside his waistband and behind his back, something that the prosecutors didn’t bring up. 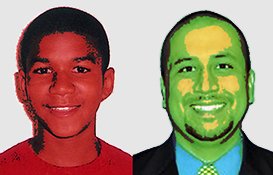 Bloom also makes the argument that a significant percentage of the six-person jury went in with the kind of cultural ignorance that all but assured an acquittal for Zimmerman.

In fact, Bloom talks with a juror, Maddy, who comes close to leaving the panel twice due to how she was treated within it. The juror, a 37-year-old Puerto Rican who had just moved to Florida, talked about how ignored she felt by her fellow jurors, the racial bias that she had to deal with in everything from what jurors watched on television to how much time she had to spend with family versus the time that another juror got with their dog.

But there were two things I found interesting about Maddy and her treatment. One, was the interaction she had with juror B37. B37 was the juror who was out peddling her story to publishers shortly after the Zimmerman verdict was rendered and apparently this woman had no business being on the jury due to her racism, according to the book.

The other thing I found interesting was what the experience of the Zimmerman verdict did to Maddy’s perception of herself as a woman of color. Before this, she claims that she never viewed her existence from the prism of race. Here, she was forced to, and the experience made her sad.

Another person who reappears is Rachel Jeantel, the person who was on the phone with Trayvon for the last moments of his life. Bloom interviews her about her experience and what she’s been doing since.

“Suspicion Nation” gives us a lot to chew on when it comes to the courts and race and Bloom gives several suggestions on ways to make things better like having municipalities hire more Black prosecutors.

But the problem is, the very people who need to read this book, the people who think that the legal system for people of color is fine just the way it is, won’t.