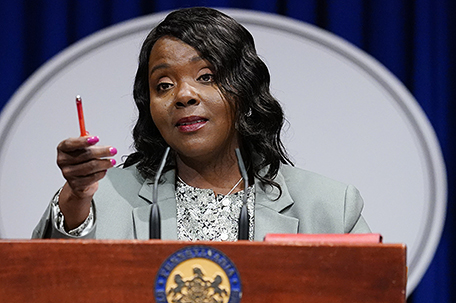 ABOVE PHOTO: Acting Secretary of State Veronica Degraffenreid speaks with members of the media during a news conference at the Pennsylvania Capitol in Harrisburg, Pa., Wednesday, May 26, 2021. Degraffenreid discussed the results of an internal investigation into a bureaucratic blunder that scuttled a statewide voter referendum on whether to give victims of childhood sexual abuse a fresh opportunity to sue their abusers and complicit institutions. (AP Photo/Matt Rourke)

By Mark Scolforo and Marc Levy

HARRISBURG, Pa. — Pennsylvania’s top state election official is warning that the 2022 primary election may have to be delayed as a group of voters asked the state’s highest court to pick a new map of congressional districts if Gov. Tom Wolf and lawmakers fail to agree on one soon.

Pennsylvania must redraw boundaries for state legislative districts and congressional districts to account for a decade of demographic shifts identified by the U.S. Census, but partisan disagreements are threatening to delay both processes.

Sixteen voters last Tuesday asked the state Supreme Court to get involved to ensure that a new map of congressional districts is approved in time for deadlines set by state law for Pennsylvania’s May 17 primary election.

First up is the period for candidates to gather enough voter signatures to qualify for primary election ballots. That begins Feb. 15, under state law.

Last Monday, the same 16 voters drew a lower court order that gave Wolf, a Democrat, and the Republican-controlled Legislature until Jan. 30 to agree on new congressional districts before that court picks a new map from among those submitted to it.

However, the 16 voters asked the state Supreme Court for a speedier process, noting that the lower court’s timeline starts a full week past when Wolf’s top election official said her agency needs a final map.

In a letter last Tuesday, Acting Secretary of State Veronica Degraffenreid said the current schedule for the Legislative Reapportionment Commission to redraw a map of legislative districts will not work with the primary deadlines.

Her agency needs the new map of districts by Jan. 24, three weeks before petitions can be circulated so that counties can update voter registration files to assign voters to the redrawn districts, she wrote.

“In short, it will not be possible to comply with the constitutionally mandated timeline for the finalization of the reapportionment plan, and the current statutorily established deadlines for the beginning of (the) petition circulation period and other subsequent deadlines leading up to the primary,” Degraffenreid wrote.

The Legislative Reapportionment Commission is composed of the two parties’ floor leaders in the House and Senate and a fifth member, the chair, selected by the state Supreme Court.

Senate Republicans have warned for nearly a year that delays in census data might require the May 17 primary date to be delayed.

Senate Majority Leader Kim Ward, R-Westmoreland, said in a text message Wednesday that she would support having a later primary “only as a last resort.”

Degraffenreid’s letter comes less than a week after the commission produced preliminary maps for the General Assembly.

People have until Jan. 18 to file objections to the proposed maps. Objections go to the state Supreme Court, but that could further delay the process, Degraffenreid warned.

As the pandemic was spreading throughout the country in March 2020, Pennsylvania lawmakers voted to delay that year’s presidential primary by five weeks, from April 28 to June 2.