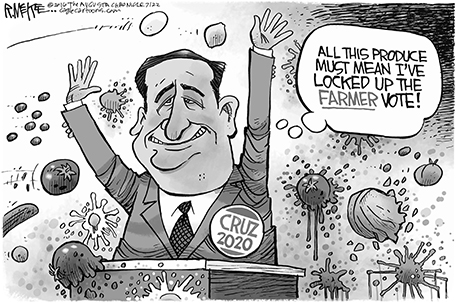 July 22, 2016 Category: Stateside Posted by: Philadelphia Sun Staff
ABOVE CARTOON:  Rick McKee, The Augusta Chronicle
The third night of the Republican National Convention was supposed to belong to the GOP’s Vice Presidential Nominee Mike Pence. But Texas Sen. Ted Cruz had other ideas.
By Denise Clay
You couldn’t blame Texas Sen. Ted Cruz if he decided to pack his bags and leave Cleveland after the reception his speech received by angry Republican National Convention delegates, expecting him to endorse the party’s candidate, Donald Trump.
But on Thursday morning, Cruz not only didn’t back down, he doubled down. According to the New York Times, Cruz’s speech, which was given to the Trump campaign to review, there were congratulations, but not an endorsement.
And Cruz told the members of the Texas delegation exactly why. Trump crossed a line, which negated a pledge that all of the Republicans took to support whomever the nominee was when he stopped attacking him, and started attacking his family, Cruz said.
“I am not in the habit of supporting people who attack my wife and attack my father,” he said. “And that pledge was not a blanket comment that if you go and slander and attack Heidi that I’m going to come like a servile puppy and say ‘Thank you very much for maligning my wife and maligning my father.”
During the primaries, Trump attacked the physical appearance of Cruz’s wife Heidi and accused his father of being involved in the assassination of John F. Kennedy.
While one might understand how attacking family members might be a deal breaker, to the delegates supporting Trump and hoping for a unified party when the delegations head for home on Friday, it was an example of Cruz being a sore loser.
At Thursday morning’s Pennsylvania Delegation breakfast, the subject of Cruz and his inability to endorse Trump’s candidacy was the talk of the room with most saying that it represented the selfishness of the Texas senator.
But the guest of honor at the breakfast was the man whose Cruz and his boos upstaged on Wednesday, Indiana Gov. Mike Pence. Pence, the GOP’s vice presidential pick, spoke to the Pennsylvania delegation about its importance to the victory of the Trump/Pence ticket.
“Make it your aim to make Pennsylvania red again,” Pence said. “Let’s work like we’ve never worked before to carry this team and this ticket and our agenda across Pennsylvania. Let’s go get this done.”
The convention ended on Thursday night with Donald Trump’s acceptance speech.
The Philadelphia Sunday Sun’s coverage of the 2016 Republican National Convention was sponsored by the Beech Interplex, Carolyn Page, Leah Fletcher, and Mary and Walter Smith.

From the AP: Everything you need to know about day one of GOP convention