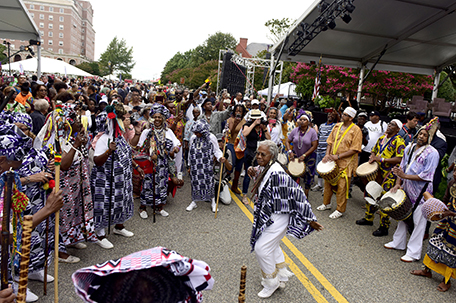 ABOVE PHOTO: Pamoja Tutashinoh dances in the middle of a circle during the parade of flags and drum call at the First African Landing Commemorative Ceremony in Hampton, Va., on Saturday, Aug. 24, 2019. (Daniel Linhart/The Daily Press via AP)

HAMPTON, Va. –Sweat and gossip flowed as neighbors waited to place orders at the back window of the house: Fish platter. Fish sandwich. Some of Miss Margaret’s homemade cake.

Margaret Wilson presided over the cheerful chaos of the Aberdeen Gardens fish fry from a folding chair. At 80, she holds special prominence, one of the few surviving original residents of a community unlike any other in the country.

Built in the 1930s, Hampton’s Aberdeen Gardens was the first federal housing project created for African Americans under the New Deal. It was the only one designed by a Black architect, overseen by a Black supervisor and built by Black laborers.

Virginians gathered just a few miles away at Old Point Comfort to mark the arrival, 400 years ago in August, of the first Africans brought to the English colonies against their will.

While Virginia is rich with carefully preserved history, from reconstructed Colonial villages to Civil War battlefields, the artifacts of African American heritage have largely vanished with time and neglect.

But traces remain. And one of the deepest, just off the city’s major commercial strip, between a Wawa and a CVS, is at Aberdeen Gardens.

The community’s roots span centuries, possibly all the way to those first Africans. The generations who followed tell a story of mutual reliance and security,  of a place that sheltered its members and helped them succeed. Today’s Aberdeeners, as they call themselves, are fighting to keep the legacy alive, not just the collection of 158 modest brick houses but the powerful sense of Black community formed here.

“I think Aberdeen Gardens represents a microcosm of the journey that we’ve taken,’’ said Steven Bond, 45, a Hampton assistant city manager, who is Black. “A lot of African American history has been lost because those in power with the resources to preserve it chose not to. It’s different in Aberdeen Gardens.’’

The neighborhood, said historian Cassandra Newby-Alexander, “is something that didn’t get erased.’’

Margaret Wilson’s grandparents were the first family to move in, in 1937. She remembers them describing the thrill of that day, their three boys unloading furniture from a wagon across the muddy, unfinished roads. The excitement of the tidy brick house, the hardwood floors, indoor plumbing, modern appliances. A huge step up from the run-down place where her shipyard-working grandfather had lived.

Their oldest son managed to get one of the houses a year later, and that’s where Wilson was born in 1939.

Black children from all over the region were brought to the community’s Aberdeen Elementary School, and there Wilson learned a different history than was taught in many of the area’s White schools.

She learned about the White Lion, the English ship that traded “20 and odd’’ Africans for provisions at Point Comfort in 1619. About how those and others who followed settled all around the area, most bound into slavery.

How those slaves built the stone Fort Monroe on Point Comfort in the 1830s. And how in 1861 three Black men –Shepard Mallory, Frank Baker and James Townsend –escaped White slave owners and demanded the federal troops at Fort Monroe give them refuge.

Maj. Gen. Benjamin Butler declared them “contraband’’ and refused to return them to the Confederates. As word spread, hundreds and then thousands of Black Virginians escaped slavery and flocked to Fort Monroe. They lived at first in crude lean-tos in the ruins of Hampton, burned by its own residents rather than leave it to the Union.

Vast “contraband camps’’ grew up around the fort. Abolitionist charities brought in teachers for the children in the camps. Under a giant oak, educator Mary Peake read the Emancipation Proclamation aloud to the former slaves.

Hampton Institute evolved from the contraband camps as a place to train Black teachers. The Emancipation Oak still stands on the campus of what is now Hampton University.

And in the depths of Jim Crow and the Depression, leaders at Hampton Institute applied to President Franklin D. Roosevelt’s New Deal for a grant to build better housing for working-class Black families from the nearby shipyards, railroads and dockyards.

Every one of those houses still stands in Aberdeen Gardens. All seven neighborhood streets were named for prominent African Americans, including Peake, Richmond banker Maggie Walker and John Mercer Langston, Virginia’s first black congressman and the first dean of Howard University Law School.

Aberdeen Gardens was so attractive, each home had at least three-quarters of an acre for growing vegetables, as well as chicken coops and community hogs, that the local newspaper called for it to be turned over to White workers.

But the president of Hampton Institute, Arthur Howe, appealed directly to Eleanor Roosevelt, who visited the neighborhood in 1938 and advocated for its Black residents.

“Eleanor Roosevelt would get a ticker-tape parade down Aberdeen Road if she were alive today,’’ said Claude Vann III.

Vann’s grandfather was an original resident, who like the others rented at first and then purchased when given the chance. Vann’s father returned after a career in the military and spent his old age as a kind of unofficial mayor and handyman. When Claude Vann Jr. died in 2013, his family had the hearse carry him through the neighborhood one last time.