Violence flares in Haiti ahead of slain president’s funeral 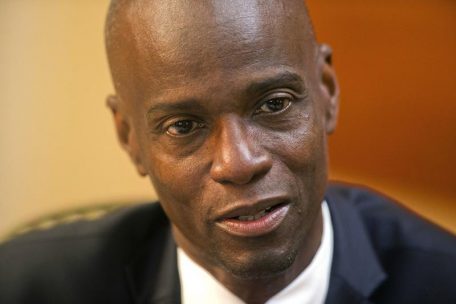 QUARTIER-MORIN, Haiti (AP) — Hundreds of workers fled businesses in northern Haiti on Wednesday after demonstrations near the hometown of assassinated President Jovenel Moïse grew violent ahead of his funeral.

Associated Press journalists observed the body of one man who witnesses said was shot in the community of Quartier-Morin, which is near Trou-du-Nord, where Moïse was born. Roadblocks were set up between the two communities, temporarily barring cars from entering or leaving as two plumes of thick, black smoke rose nearby.

Many workers walked hurriedly in a single file along the main road that connects Quartier-Morin with Cap-Haitien, the city where events to honor Moïse were scheduled to start Thursday ahead of Friday’s funeral.

Fleeing people said they saw burning tires and men with weapons demanding justice for Moïse. One woman who was out of breath said the armed men told her, “Go! Go! Go!” as employees clad in uniforms of all colors obeyed and left the area. She declined to give her name, saying she feared for her life.ADVERTISEMENT

Abnel Pierre, who works at the Caracol Industrial Park, said he was forced to walk 45 minutes home because the bus that transports employees was stuck behind blockades. He declined further comment as he walked swiftly toward his house as the sky began to darken.

These were the first violent demonstrations since Moïse was shot to death at his private home. They came a day after Ariel Henry was sworn in as the country’s new prime minister, pledging to form a provisional consensus government and to restore order and security.

In the capital of Port-au-Prince, Martine Moïse, widow of the slain president, made her first public appearance since her surprise return to Haiti on Saturday, although she did not speak. She had been recuperating at a hospital in Miami after she was wounded in the July 7 attack at the couple’s private home.

She wore a black dress and black face mask and her right arm was in a black sling as she met with officials near the National Pantheon Museum, where ceremonies are being held to commemorate her husband. She was accompanied by her three children.

The capital remained peaceful in contrast with the community in northern Haiti.

Authorities have said at least 26 suspects have been detained as part of the investigation into the assassination, including 18 former Colombian soldiers and three Haitian police officers. At least seven high-ranking police officers have been placed in isolation, but not formally arrested, Police Chief Léon Charles has said.

On Wednesday, Colombia’s government said it would have a consular mission in Haiti on July 25-27 to help the detained ex- soldiers and repatriate the bodies of the three others killed by Haitian authorities in the aftermath of the assassination.