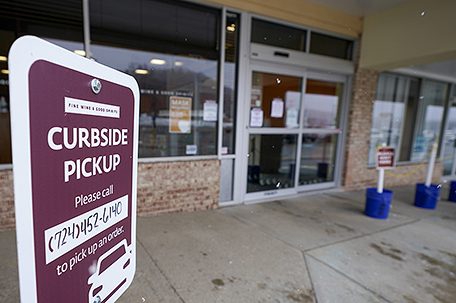 ABOVE PHOTO: Signs regulating customers due to COVID-19 are on the door next to a roped off area for overflow customers to wait near the door to the state run Fine Wine and Good Spirits store in Harmony, Pa., Thursday, Jan. 28, 2021. (AP Photo/Keith Srakocic)

HARRISBURG, Pa. — The Republican-controlled state Senate on Wednesday approved legislation that substantially expands which outlets can sell bottles or cans of mixed hard alcohol drinks to go, although Democrats called it a poison pill that will kill other provisions designed to help restaurants and bars.

The bill passed narrowly, 26-24, with two Republicans and the chamber’s lone independent joining every Democrat in opposing a bill destined to be vetoed by Gov. Tom Wolf. The bill goes to the House next.

Originally, the bill had bipartisan support for extending provisions granted to bars and restaurants to help them make money under COVID-19 restrictions.

Those provisions included allowing the establishments to set up outdoor seating without fees or inspections and to make mixed hard alcohol drinks and sell them in to-go containers.

Private wholesale distributors would sell the products to retailers, not the state-controlled liquor store system.

Currently, only state-owned liquor stores are allowed to sell the products at retail in Pennsylvania.

Democrats said the provision would siphon revenue away from state-owned liquor stores and worsen the problem of illegal alcohol sales at so-called “stop-and-go” convenience stores and delis. Republicans said it would boost state tax revenues and improve consumer convenience.