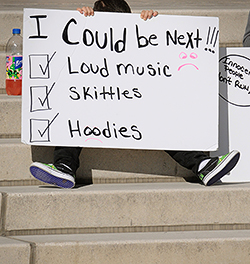 Jacob Black ducks his head behind a sign he holds for his mom Jacqueline Black outside of the Duval County Courthouse as the jury enters the fourth day of deliberations in the trail of Michael Dunn, Saturday, Feb. 15, 2014, in Jacksonville, Fla. Large crowds gathered outside the courthouse to wait for a verdict in the Dunn trial. Dunn was convicted Saturday of attempted murder in the shooting death of a teenager during an argument over loud music, but jurors could not agree on the most serious charge of first-degree murder. (AP Photo/The Florida Times-Union, Kelly Jordan)

ABOVE PHOTO: Sylvia M. paints a colorful pattern at an “ARTZ in the Making” program.  (Photo/PCA) By...

By Stan Choe ASSOCIATED PRESS  NEW YORK — The buck isn’t stopping. The value of the U.S....